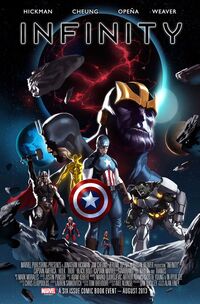 Yes... We all know of that Earth, But this... this is an Earth more flavorable than accustomed. An Earth changed... We have word of discord in the house Inhuman, schism between mutant schools. And now the most flavorable news of all... Brothers. Sisters. Sharpen your teeth, prepare to consume a great meal. Earth, you see... She has no Avengers.

When the Avengers departed Earth in order the face the Builders, an ancient and powerful race with the objective to destroy Earth, Thanos and his Black Order took advantage on the absence of Earth's Mightiest Heroes from the planet in order to raze it.[3]

Thanos' army invaded Earth, and the Black Order confronted the Illuminati, as one of Thanos had gathered the information they had the Infinity Gems. Black Panther managed to force Black Dwarf to withdraw, while Doctor Strange was embarked in a mental fight against Ebony Maw. Beast and the X-Men fought Corvus Glaive and Supergiant. Proxima Midnight confronted Namor in the ruins of an Atlantis where its inhabitants were annihilated by an attack from Wakanda, part of a conflict caused by Namor's attack on Wakanda during the conflict between the Avengers and the X-Men. However, the Black Order left their different locations as soon as they discovered the Illuminati didn't have the Infinity Gems. Black Bolt was visited by Glaive in order to demand a tribute, the heads of Inhuman younglings between the ages of sixteen and twenty-two, or the annihilation of Earth's inhabitants. Meanwhile, the Avengers allied themselves with the Galactic Council and their first battle against the Builders proved a disaster, as numerous Avengers were captured in the process. Back on Earth, Black Bolt used the Inhuman Codex to discover Thanos used the tribute demand as a cover for his true mission, to kill his secret Inhuman-descendant son whose identity and location were unknown even to his father.[4]

The Avengers and the Galactic Council were attacked once more by the Builders, who had discovered them sheltering in a planet, at the same time the powerful alien race started conquering numerous planets. Captain America managed to make himself heard by the Galactic Council and planned a retaliation against the Builders which resulted in the successful liberation of the Avengers which were being held captive and the destruction of numerous forces of the Builders, partially turning the tide of the battle. Back on Earth, numerous heroes fight Thanos' invaders.[5] When the Illuminati headed to numerous locations around the world where Thanos' son might have been, Doctor Strange found the boy in a secret Inhuman town in Greenland. But as he had been under the influence of Ebony Maw, Maw remained in the location and forced Strange to forget about the discovery, and to leave, now freed from Maw's control.[6] In Attilan, Black Bolt is confronted by Thanos himself, and the Inhuman city is destroyed during the battle. During the destruction of Attilan, Black Bolt took the opportunity to activate an Inhuman Bomb which spread the W:C:marvel:Terrigen Mists upon the entire face of Earth.[5]

As millions of Inhuman descendants suffer from Terrigenesis across Earth, including Thanos' son, W:C:marvel:Thane, Thanos defeated Black Bolt in combat in the ruins of Attilan.[7] In space, Captain America still realized he and his allies were outnumbered and outgunned, and decided to perform a false surrender.[8] Thor falsely surrendered to the Builder who was under control of Hala and killed him, freeing the planet and gaining powerful lost allies.[7] Shortly after, the rogue W:C:marvel:Gardeners, one of the races created by the Builders and their helpers, managed to wake up a comatose Capitain Universe to annihilate the Builders in their command vessel. Desperate, the Builders ordered all their W:C:marvel:Alephs to destroy themselves and everything in their path in the process.[9]

Slowly, the Avengers and their allies, which grew in number with each world freed from the Builders' control, turned the tide of the battle and destroy the remaining Alephs. But the victory is shorlty lived, as the Galactic Council informed the Avengers that Earth had fallen to Thanos' invasion. In Greenland, Maw possed as an ally and offered Thane a suit to control his powers, but also captured him in a containment field, followed by Maw alerting Thanos about the discovery of his descendant. Thanos and the rest of the Black Order arrived to W:C:marvel:Wakanda, following Namor's declaration that the Infinity Gems were there when he was forced to surrender by Proxima Midnight, and found in W:C:marvel:Necropolis the Illuminati's hidden headquarters, along with the anti-matter bombs, which they planned to use to destroy Earth by activating them using Black Bolt. After the Black Order except Supergiant departed Wakanda to go to Greenland, the Illuminati arrived with the help of Maximus and Lockjaw and started fighting back Thanos' army. Meanwhile, the Avengers and their numeorus allies begun approaching Earth.[10]

After breaking thrown the barrier settled by Thanos' army around Earth with the help of the Guardians of the Galaxy, the Avengers managed to arrive to Thanos' location and fight him and what was left of his Black Order and free Thane, the son of Thanos, who his father had captured. When the Illumianti arrived to Necropolis and the room where the anti-matter bombs were, they found themselves against Thanos' general Supergiant, who defeated them by mentally controlling Black Bolt. When Supergiant activated the bombs, Maximus appeared with the trigger. He triggered the bombs, but also used Lockjaw to transport the anti-matter bomb along with Supergiant to a distant uninhabited planet where she died in the explosion. Back to the battle of the Avengers against Thanos, Ebony Maw double crossed the Mad Titan and freed Thane to let him fight his father. Thanos and Proxima Midnight were trapped by Thane in an amber construct which left them in a state of "living death."

The following days, the Avengers helped rebuild the damage caused by Thanos' invasion around the Earth. Iron Man convinced the Avengers to let him keep Thanos, as he would supposedly take care of him, but secretly placed him in the Necropolis, where he and the rest of the Illumianti went about planning for the universe's coming end. In the side of the Galactic Council, Ronan, the Acusers and the Kree Army were perdoned by the Supreme Intellience, Gladiator planned to expand the Imperial Guard, the Skrull Empire Fractions joined with the coronation of Kl'rt, and Annihilus managed to reopen the portal to the Negative Zone.[11]

Retrieved from "https://heykidscomics.fandom.com/wiki/Infinity_(Event)?oldid=1733366"
Community content is available under CC-BY-SA unless otherwise noted.