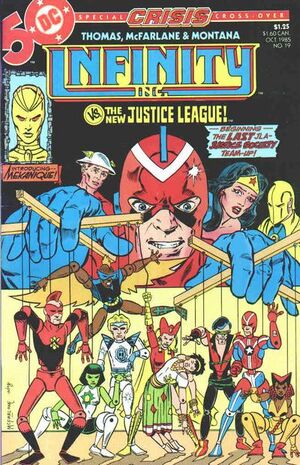 Appearing in "Last Crisis On Earth-Two!"Edit

Synopsis for "Last Crisis On Earth-Two!"Edit

In a story continued in Justice League of America #244, members from both Infinity, Inc., and the Justice Society traverse the dimensions to Earth-One for the final Justice League-Justice Society team-up. Also, Mekanique, who figures prominently in the Crisis crossovers in All-Star Squadron is introduced.

Retrieved from "https://heykidscomics.fandom.com/wiki/Infinity_Inc._Vol_1_19?oldid=1436569"
Community content is available under CC-BY-SA unless otherwise noted.