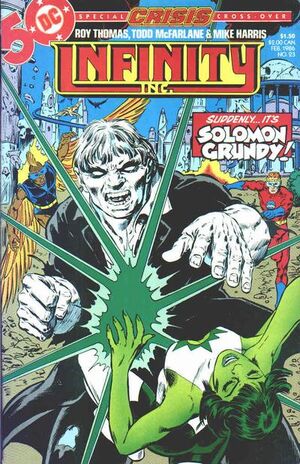 Come down green girl -- daughter of my old enemy Green Lantern! Come down -- and we fight to the death!

Wildcat II eavesdrops on Green Arrow of Earth-Two, Atom of Earth-Two and Liberty Belle in a scene paralleling events in Crisis #7. Immediately thereafter, the Star-Spangled Kid and Jonni Thunder are hurled into the past by an enemy vortex, another result of the bizarre weather. They are followed by Knodar, a criminal from the future pulled into the present by the Crisis. Meanwhile, Jade and Brainwaye II accompany Northwind to his home, the hidden civilization of Feithera. Together with Solomon Grundy (taken from Feithera, then returned, by Harbinger), they prevent a glacier from destroying the city and its inhabitants.

Retrieved from "https://heykidscomics.fandom.com/wiki/Infinity_Inc._Vol_1_23?oldid=1436573"
Community content is available under CC-BY-SA unless otherwise noted.