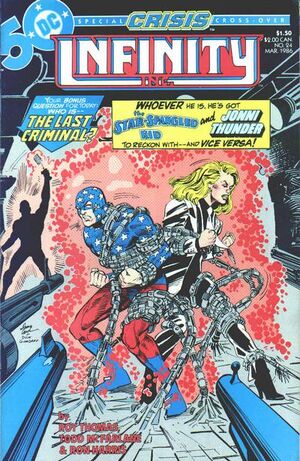 Knodar's the name -- and crime is my game!

Appearing in "Back from the Future!"Edit

Synopsis for "Back from the Future!"Edit

While a phalanx of super-heroes battle the Anti-Monitor (Crisis #7), the Earth-Two heroes discuss the ramification of the Crisis. At the same time, Star-Spangled Kid and Jonni Thunder find themselves on Hollywood Boulevard, where the Crisis has caused a time-warp where 1935 and 1985 Earth-Two coexist. Together, they prevent Knodar and his gang from taking over the headquarters of Infinity Inc.

Retrieved from "https://heykidscomics.fandom.com/wiki/Infinity_Inc._Vol_1_24?oldid=1436574"
Community content is available under CC-BY-SA unless otherwise noted.