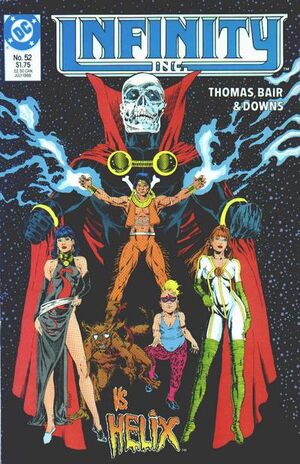 Appearing in "To Love and to Die in L.A."Edit

Synopsis for "To Love and to Die in L.A."Edit

Infinity try to track down Mr Bones on suspicion of Skyman's murder and are drawn into battle with Helix, who are under the mental domination of the supposedly dead Dr Love, their creator. Helix ultimately turn on Dr Love and murder him rather than kill Mr Bones at his command, but still disown Bones, who leaves alone having convinced the Infinitors of his innocence. Meanwhile, Injustice Unlimited attack Stripesy Dugan and his son at Stellar Studios.

Doctor Love gives his first name as 'Amos' in this issue, though it has previously been established to be 'Benjamin'. He also calls himself Dr Raymond Lamour.

Retrieved from "https://heykidscomics.fandom.com/wiki/Infinity_Inc._Vol_1_52?oldid=1436602"
Community content is available under CC-BY-SA unless otherwise noted.