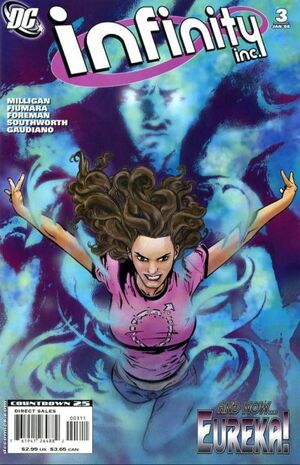 The u-underpants s-seem to be leading us to that house.

A creature called Kid Empty is absorbing thoughts from Steel when his niece, Steel fights it off. John passes out. At the hospital, they find out John is going to be just fine.

Natasha returns to the Project Everyman shared home and tells the others they have to do something about Kid Empty. The kids see a bunch of underpants in the street outside. They follow a trail of underpants to a house. They enter the house and find a red-haired woman sitting in front of a picture of Kid Empty.

Amazing Woman transforms into a teenage girl and punches out the red-haired woman. Erika turns back into Erik and leaves after another teen makes a joke about him. Kid Empty appears and knocks out Natasha.

Retrieved from "https://heykidscomics.fandom.com/wiki/Infinity_Inc._Vol_2_3?oldid=1436606"
Community content is available under CC-BY-SA unless otherwise noted.