Part of the 'All-New Marvel NOW!', and 'Inhumanity' events 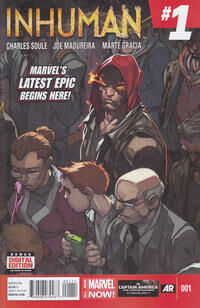 After the fall of the Inhuman City Attilan and the explosion of the Terrigen Bomb, thousands of people across the globe with no connection to the strange super race have transformed into Inhumans! The transformations have given them powers that are dangerous and terrifying, making them targets. With Inhuman king Black Bolt believed dead, is there anyone for these new Inhumans to turn to?

Retrieved from "https://heykidscomics.fandom.com/wiki/Inhuman_Vol_1_1?oldid=1732227"
Community content is available under CC-BY-SA unless otherwise noted.