Start a Wiki
Part of the 'All-New Marvel NOW!', and 'Inhumanity' events 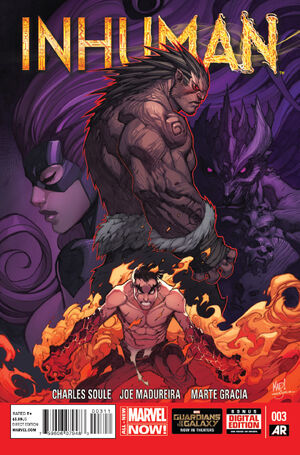 Recruiting a NuHuman named Jason in Minnesota, Lash teleports them both to his home city, Orollan. There he explains that Jason and his family were descendants of the Inhumans, and while his family may have died during Terrigenesis, Jason has survived, and will now have a home among his fellow survivors. With their gifts, they can rebuild the city and perform wonders.

In New Attilan in the Hudson River, a man named Lineage has come before Queen Medusa claiming to know things she needs. Asked to prove his story, he removes his shirt, allowing faces to appear on his skin and explain that they are his ancestors of centuries. Everything they know, they can impart to Lineage, and Lineage can use this knowledge to benefit himself and the Inhumans. Knowledge is, after all power, a fact that Lineage respects from his time in New York's criminal underworld.

Medusa summons an Inhuman telepath to get to the bottom of this, but Lineage brags that the last man who attempted it died trying. Not wanting to risk her servant, Medusa changes tactic, saying that Lineage can help or leave.

In Orollan, Lash shows Jason the most sacred space in Orollan, the Terrigenesis chamber. Here, they hoarded the crystals that bestow terrigenesis, that will show the worthy their true form. Lash says Jason must call himself Korvostax now, and introduces him to other NuHumans, who explain that humans have formed mobs and attacked them in their communities, and that Lash blames Queen Medusa.

In Attilan, Dante has been training with Gorgon, and can shoot blasts of fire with accuracy and confidence. Dante wonders if his new fireproof clothes make him a super hero. Gorgon brushes the question aside, saying that Dante is an Inhuman, and that anything else can come after. He also says that sometimes, newly transformed Inhumans will give themselves a new name once their terrigenesis. Wishing to contribute, Gabby, Dante's sister, says she has a new name for Dante - Inferno. Grinning, Dante says it is as good as any.

Queen Medusa walks in, looking to recruit Dante for a mission against Lash. Dante agrees, but insists on one condition: they must look after his sister and her child. With this, he will follow them anywhere. Medusa agrees.

In Orollan, the new recruits are rebuilding a wall despite a near-total lack of prior experience. Jason asks why Lash isn't showing them how to do this, and the others tell him it isn't wise to speak like that - there used to be two more NuHumans here.

The New Attilan group teleports nearby, looking to capture Lash at the advice of Lineage. Lash tells the others that Queen Medusa means to kill them, and urges them to fight. As the battle develops, Jason taps into his powers for the first time, and begins throwing rocks at Gorgon.

Lash draws on the energy of a volcanic spring to power energy blasts that he fire randomly into the scrum. Jason is saved from death by Gorgon, who then stuns Lash with a small earth tremor.

Talking hold of Lash, Medusa pins him, then invites Lineage to step forward and tell Lash what he told her. Lineage explains that Black Bolt originally released the Terrigen Cloud because something is coming for the Inhumans, and they need everyone to hold it back. As many hidden bloodlines, from every nation on Earth, united. If they cannot prepare, their species, and maybe humans as well, will be extinct.

Medusa gathers the NuHumans, and tells Lash that he can help her, or he can stay away, or he can face defeat. And that Lash can tell Ennilux and the others from her.

• Uncover the secret history of an ancient branch of Inhumans!

• A new Inhuman named Flint sees his world fall apart before his eyes!

Retrieved from "https://heykidscomics.fandom.com/wiki/Inhuman_Vol_1_3?oldid=1435563"
Community content is available under CC-BY-SA unless otherwise noted.