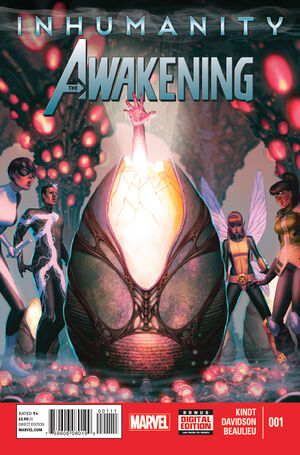 • Inhuman chrysalises have appeared across the world…some want them, some want to destroy them…and your favorite superhuman students are caught in the crossfire!

• From the pages of INFINITY: THE HUNT comes more craziness from the Avengers Academy and the Jean Grey School – written by THE HUNT’s Matt Kindt!

Retrieved from "https://heykidscomics.fandom.com/wiki/Inhumanity:_The_Awakening_Vol_1_1?oldid=1647297"
Community content is available under CC-BY-SA unless otherwise noted.