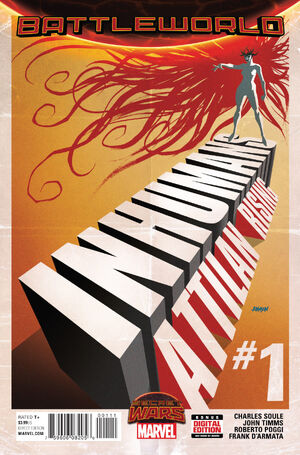 I made you regent of this domain because you are royal. You understand this to rule, and the power you and your Inhumans gain through exposure to Terrigen Crystals means you are equiped to enforce that rule. But there are many, in many realms, who would take your seat in an instant, if you were to lose favor in my eyes. Fail in this task I have set you, Medusa, and they will have their chance. New Attilan is crucial. To me, and to the safety and security of Battleworld. Only a ruler strong enough to keep it safe will be permitted to keep it at all. And the weak... The weak become meat for the beasts beyond the Shield.

Appearing in "Part One: The Voice Unheard"Edit

Synopsis for "Part One: The Voice Unheard"Edit

Retrieved from "https://heykidscomics.fandom.com/wiki/Inhumans:_Attilan_Rising_Vol_1_1?oldid=1541655"
Community content is available under CC-BY-SA unless otherwise noted.