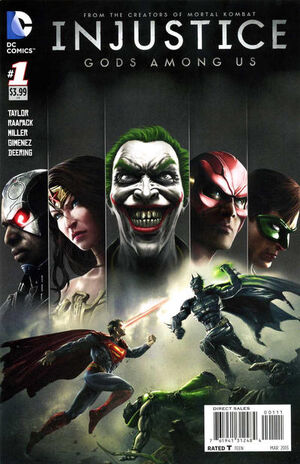 This is a priority call to all active Justice League members. I need all eyes and ears I can spare in Metropolis. A person is missing.

Appearing in "Injustice: Gods Among Us - Part One"Edit

Synopsis for "Injustice: Gods Among Us - Part One"Edit

A sullen Batman reflects that crime in Gotham has been silenced but not by justice as much as by fear. Fear of Superman, who is the dictatorial ruler of the world, reigns.

Five years ago, Clark Kent, also known as Kal-El, Superman, is awoken in the middle of the night to the first sound of two hearts beating inside his wife, Lois Lane - hers and their growing baby's. Lois and Clark embrace in the joy of this discovery when Lois receives an anonymous tip about a crooked councilman taking a pay-off and prepares to leave. Clark offers to join her but she refuses, insisting it isn't necessary. The couple separately depart on their respective routine as hero and journalist.

As Superman, he finds Batman already in Metropolis while on his way to S.T.A.R. Labs and in the middle of a fight with some street toughs. Superman proposes a rooftop rendezvous and telling Batman about his recent news; in which Batman has figured it out already - he can see the fear and joy all over his friend's face. Batman is asked by his friend as the baby's godfather.

Meanwhile, Lois and Jimmy Olsen are at the docks and are on the lookout for their councilman. Jimmy gets his camera ready, but he is suddenly shot dead by the Joker.

Over at S.T.A.R. Labs, Batman is investigating the theft of a supply of kryptonite on which the scientists were experimenting to determine its conceivably beneficial-to-humanity properties. Superman arrives, panicked, begging Batman for help in finding Lois, who is kidnapped by the Joker.

Batman alerts the Justice League - Green Arrow, Cyborg, Wonder Woman, The Flash. Searching areas of Metropolis that Superman can't immediately see while airborne, Flash finds the corpse of The Scarecrow, murdered by the Joker. Wonder Woman discovers at the docks that the Joker has hijacked a submarine.

Superman rushes over to apprehend the submarine and promptly beaches it before storming in, where he finds The Joker and Harley Quinn in the infirmary with Lois strapped to an operating table, a scalpel in the Joker's hand and gas masks on both his and Harley's faces. Superman is shocked that the villains are accompanied by Doomsday.

Confronted by Doomsday, Superman, reacting quickly to protect Lois and their unborn child, charges at his foe and flies off with him into space, leaving the Joker and Harley Quinn behind to make their escape. However, Green Lantern stops them with a giant hand construct as he and the other Justice League members arrive on the scene.

Batman investigates the submarine to find it empty except for Scarecrow's fear toxin. A quick interrogation of The Joker soon reveals that the fear toxin was tainted by Kryptonite he had stolen from S.T.A.R. Labs and that Superman isn't fighting Doomsday at all. Doomsday is simply a hallucination. And as Batman gets through to him over their communications system and being in space helps to clear his head of the fear toxins, Superman comes to a tragic realization: he has taken Lois into space without any kind of environmental protection or breathing apparatus, killing her and their unborn child.

Matters are quickly worsened as The Joker reveals that the operation he was performing on Lois involved connecting her heart to the missile in Metropolis. As Lois dies, a nuclear warhead is activated, thereby devastating Metropolis.

Retrieved from "https://heykidscomics.fandom.com/wiki/Injustice:_Gods_Among_Us_Vol_1_1?oldid=1491571"
Community content is available under CC-BY-SA unless otherwise noted.