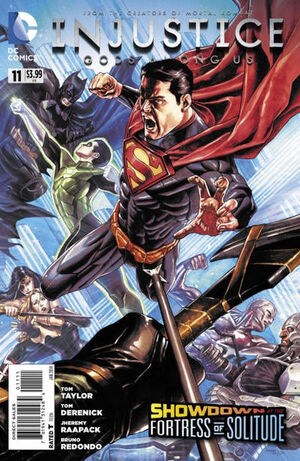 I have more power in me than ten nuclear bombs, and you and your dumb magic sword have just breached the thing that contains it. Now I have a choice to make. I can stand here. I can let go. I can take you and the entire North Pole with me. Or I can do what's right.

Appearing in "Clash of the Titans"Edit

Synopsis for "Clash of the Titans"Edit

The President of the USA is woken up by Batman. Bruce says he is in a situation and needs a distraction. When asked how large a distraction is necessary, Bruce provides undisclosed information over the phone. The President simply says "I see."

Later, Oliver Queen and Dinah Lance enter a unisex restroom, having followed an address provided to them by Batman. Dinah had been given the address, whereas Oliver had been given the stall number they were required to enter. When they enter the stall, the toilet begins to talk, identifying Green Arrow and Black Canary. Their retinas are scanned, and the couple is granted access to the Insurgency base.

Black Lightning is confronting Batman over his prolonged imprisonment of Hawkgirl; Bruce says he has released her, never having intended to keep her confined for very long. Bruce reveals that J'onn is apparently dead, having been burned by Superman after being questioned by Captain Atom and the Huntress. Bruce then reveals he received an encrypted message the evening before, revealing the details of the Super-Pill and where they are being manufactured. If there is any hope for the future, the Insurgents must get their hands on the technology.

Batman then receives a notice that US Naval warships have just turned towards Korea, commenting that this movement could not have been missed by Superman and the Justice League. He calls Catwoman, Canary and Atom towards the teleporter, until Arrow objects, saying he's taking his girlfriend away from him. The two begin to bicker until Dinah intervenes, saying an entire army is buying the Insurgents a small amount of time for them to save the world. Bruce, Nathaniel, Selina, Dinah and Oliver are teleported half of a mile from the Fortress of Solitude; Bruce instructs Nathaniel to fly Selina ahead and find them a way inside the fortress.

On Pacific waters, several Naval officers are trying to find Superman and his response to their agression. Kal-El is shown flying to Washington, instead of the Pacific, where he proceeds to confront the President, and that he could call the ships back with a phone call instead of Superman needing to fly out to the oceans to stop them. The Insurgents are then gathered outside the door to the Fortress, which has already been unlocked by Selina. Nathaniel opens the door to reveal Jonathan and Martha Kent inside; their surprise immediately alerts Superman several thousand miles away, who immediately takes off back to the Fortress.

Batman turns to leave the Fortress and alert Captain Atom to Superman's arrival, but looks on to see Kal-El holding Nathaniel by the throat.

Martha Kent asks Superman to stop his attack, and assures him that she and Jonathan are all right. Nathaniel retaliates against Superman by emitting a large nuclear blast to him, which ricochets to the ceiling and brings a large portion of ice down. This separates Oliver, Martha and Jon from Bruce, Dinah and Selina. Dinah wants to use her Canary Call to try and clear the ice, but Catwoman says her call will only bring more of the ceiling down. Before leaving, Batman tells Green Arrow that he had hid a locator underneath his hood, and instructs him to keep it safe until the other Insurgents can find another way inside.

On the Arctic tundra, Captain Atom and Superman continue to fight each other. Nathaniel easily overwhelms Kal-El, and reveals to him that Nathaniel had been working with the United States Government in an effort to take down Superman and the Justice League. Atom reveals his reasoning for aligning himself with Batman and the Insurgency, and charges up another, seemingly fatal, nuclear blast.

Before he can deliver the blow, Wonder Woman intervenes and slices Nathaniel's neck with her magic sword. A large amount of nuclear energy begins to seep out of his body. He says Diana had used her sword to breach the matrix that contained his powers, consisting of over ten nuclear bombs in power. Nathaniel is faced with an ultimatum: to stand his ground and take out the North Pole, or do what's right and kill Superman.

He flies into the air with Kal-El still in his grasp, intending to kill him in the nuclear blast that will result from Nathaniel's detonation. Diana attempts to stop him, but is caught in the blast zone and shot to the Earth. Superman uses his heat vision in an effort to prematurely detonate Nathaniel above the Earth.

Narration recounts previous events, detailing Captain Atom's attempt to kill Superman with his remaining powers. Kal opens his eyes, alive, and flies back down to Earth to find Diana's body. She is critically wounded from Nathaniel's explosion, and calls Cyborg for immediate evacuation of Wonder Woman. When Flash arrives, Kal reveals what had just happened to him, and the true powers who were trying to stop the Justice League. The Flash leaves Superman, who then flies back to the Fortress of Solitude to confront Green Arrow.

In the Fortress, Oliver attempts to distract and dissuade Superman while grabbing for one of the Super-Pills. Kal-El destroys the box with his heat vision, instructing Oliver not to touch the pills. Arrow then fires an arrow at Superman's body, trying to keep his eyes away from Arrow and on his arrows. The arrow intended to distract Superman bounces off his body and lands in Jonathan Kent's shoulder. Infuriated, Superman knocks Green Arrow back through a crystal wall and to the floor. At some point, Ollie attaches both his locator and one of the Super-Pills to an arrow, launching it high into the air above Superman's shoulder. Snapping, Superman lunges forwards, fist drawn back.

Outside the fortress, Bruce and Selina are waiting for Dinah, who remains faithful in Ollie. Ollie's tracker then lights up on Batman's screen, sending the Insurgents to it. A lone arrow is visible, with a Super-Pill and Arrow's locator strapped to it. When Bruce says that they should wait by the teleporter for Ollie, Dinah simply says "He's not coming."

Back in the Fortress, Superman beats Green Arrow to death, shown through Ollie's perspective. Ollie has a vision of Dinah, pretty bird, before dying.

Retrieved from "https://heykidscomics.fandom.com/wiki/Injustice:_Gods_Among_Us_Vol_1_11?oldid=1436629"
Community content is available under CC-BY-SA unless otherwise noted.