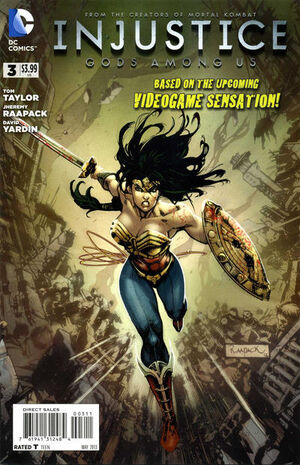 Appearing in "Injustice: Gods Among Us - Part Three"Edit

Synopsis for "Injustice: Gods Among Us - Part Three"Edit

At the United States Drone Command, in Nevada, an army officer fires a missile from a remote drone in an unknown but presumably Middle Eastern country. Before the target is destroyed, Superman intervenes and detonates the missile prematurely, saving the target's life and those of other innocent people on the ground.

In the White House, the President of the United States discusses this with his advisers and military officials. They discuss Superman's impact on the world, which he has decided to police and protect. The President asks what they can do, to which one of his advisers mentions an intricate plan to inhibit Superman's efforts to interfere with the United States' affairs. The plan is executed, through a series of shell companies as to remove any sign of the President's involvement.

Superman enters, having felt his adoptive parents in danger. He comes across a mirror that Mirror Master left, along with a family photo of the Kents meant to taunt Superman. Mirror Master says he will never see his parents again, and that future attempts to meddle with the United States' affairs or those of other governments will results in the torture or death of the Kents. If Superman complies, Mirror Master will "start sending little pieces of ... them." The comic ends as the picture of the Kents burns into ash.

Cyborg appears as the first of the heroes to stand by Superman, commenting on how the world would have been "destroyed ten times over" if not for Kal-El. Diana tells Barry that Superman had said that Mirror Master was involved in the kidnapping. The Flash then asks Cyborg to set the teleporter to Central City, whereupon the Justice League confronts various members of The Rogues for information on the whereabouts of Mirror Master. Captain Cold tells Barry that Mirror Master was last seen in the World's End bar in Keystone City. Before leaving, Captain Cold tells The Flash to "go easy" on Mirror Master, and says heroes "weren't the only ones lost in Metropolis".

In Bolivia, The Flash gives Superman the Mirror Belt and tells him that it's "the perfect hiding place" for his parents. Superman enters the mirror as the Flash affirms his faith in Superman that he will find his adoptive parents, because he's Superman.

Back in the White House, a presidential aide informs the President of the United States that their plan to thwart Superman had failed. The President then asks his aide to find another way to fight "an angrier Superman."

As he enters his office, Batman sneaks up from behind the President, commenting on his stupidity. Bruce says that he was acting on a hunch when the President says that the plan could not have been traced back to him. When the President makes a comment on how the Justice League wouldn't "dare touch [him]," Batman ridicules him for his naivety and that no one would ever look for his corpse on Saturn. Batman says that his plan failed, and in doing so fortified Superman's resolve and the other heroes behind his cause.

As Batman leaves the office, the President asks Batman how Superman could keep the power once he has it. "Power corrupts," he says. "Trust me. I know..."

Later on, Ares provides dialogue as Wonder Woman deflects several airborne rockets and attacks multiple planes and tanks. Ares comments on how Diana left Themyscira on a mission of peace, but that "she does not look peaceful." On the ground, Diana comments on how peace "sometimes needs to be fought for." Diana explains to Ares how Qurac has ignored the neighboring country of Jusdal's request for a ceasefire. Wonder Woman flips over a tank and says that she will stop once Qurac stops shelling Jusdal.

Ares questions Wonder Woman's intent behind siding with Superman, asking if she truly believes in his cause as she reflects bullets off of her armor and cheek. She commands the soldiers to drop their guns and leave. Ares then asks Diana if she believes she can replace Lois Lane as Superman's wife. Diana compliments Lois, saying she "was an incredible woman," but realizes that Ares fears the union between herself and Superman. Diana then mocks Ares, saying Ares would become famished in a world with no conflict. She calls him "Dreaded Ares, God of Ponies!"

Ares then confronts her, saying that he is fueled by death and destruction such as she has wrought. He attempts to kill her, but Superman intervenes and breaks a horn on Ares' helmet. Diana then cuts off and takes one of Ares' hands, saying he can have it back when he "can be trusted with it." Ares threatens Diana, and says he will prevent her children from ever taking their first breath as she stabs Ares in the chest.

Diana explains that gods don't die, only fade, and that they should leave Ares to fade while they talk to the Qurac government about a ceasefire. Because of that, Ares fears the union between the Kryptonian and Amazon, saying that if Wonder Woman were to take away Superman's restraint, "the world could not fight against that."

And in a world with no war, he would become...the God of Ponies.

Retrieved from "https://heykidscomics.fandom.com/wiki/Injustice:_Gods_Among_Us_Vol_1_3?oldid=1517491"
Community content is available under CC-BY-SA unless otherwise noted.