Injustice: Gods Among Us Vol 1 5 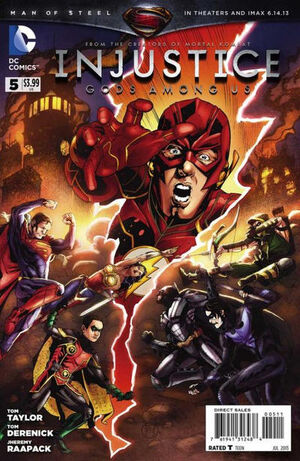 Damian, you're thirteen years old. How is that you're the darkest thing in this cave?

Appearing in "Injustice: Gods Among Us - Part 5"Edit

Synopsis for "Injustice: Gods Among Us - Part 5"Edit

The Flash is seen running on the Nullarbor, the longest road in Australia. One perfectly straight section of the road stretches for ninety miles, the longest in the world. Barry says he often comes here to think and to run; but today, he just wants to run.

Two hours ago, him, Superman and Wonder Woman attempted to disperse a protest in Melbourne. Many civilians disagreed with the Justice League and resented their power. In the midst of this, a boy confronts them and rips off a cloak, calling himself Galaxor and flying into the air. Before he can do anything, Superman and Wonder Woman restrain him and shove him into the ground, paralyzing him. The Flash can see all of it happen in slow motion, calculating everything he could have done to help Galaxor but did not do.

As Barry runs to get an ambulance, Batman contacts him and scoffs at the Justice League's acts of dispersing a civilian protest. He says that an ambulance is already en route, and that Barry should instead go to the Advanced Sciences and Genetic Testing Laboratory in Canberra. As Barry enters the facility, he is greeted by an aide and shown Galaxor's room. He is revealed to be Mitchell Davies who idolized modern superheroes, sporting a poster of himself and The Flash, autographed by Barry himself. Out of fear and guilt, Barry runs out of the room and to the Nullarbor.

He comes across a kangaroo that was hit by a truck and asks himself if what he is doing is truly right. He gets running again, repeating the fact that "he just wants to run."

A flash-forward of Batman kneeling next to a corpse is seen. He has a flashback of the death of his own parents, comparing that moment to what is feeling now. His son is dead.

On Gotham 2 News Station, two reporters are announcing an interview of Doctor Boone, to discuss the situation of the United States' division over the Justice League's and Superman's efforts to police the globe. Two Face appears in his place, however, saying "Channel Two. Two anchors. A nation divided. I couldn't stay away." He plans to flip his iconic coin to determine the fate of the news anchors, but Superman vaporizes the coin in mid-air. Harvey then pulls out a gun and demands to know what side was facing up. He grovels at Superman's feet, asking him if he saw what it was, to which Clark replies he didn't and destroys Two-Face's gun.

The two news anchors thank Superman and the female asks Superman several personal questions regarding the Daily Planet and Lois Lane. When she asks Superman if he wants to remain proactive in the world's affairs, he announces that there is something "...sick in your city."

In the Batcave, Batman orders Robin to prepare the Batplane as Superman announces that he is emptying Arkham Asylum and taking the inmates to places unknown. As Bruce and Richard board the plane, Robin questions Batman's motives and puts his support behind Superman. Nightwing comments on how Damian can be "the darkest thing in this cave," being only twelve years old. As Damian continues a tirade against Bruce, he takes off and abandons him in the Batcave.

Richard and Bruce, now in the Batplane alone, discuss the latter's and Damian's stubbornness, and that for someone to be as stubborn as Bruce, they would have to be related to him.

At Arkham, one of the caretakers thank Superman for returning Harvey to the asylum, to which Diana replies they aren't returning him. They've "lost confidence" in the facility and are moving all the inmates to a secure facility. Batman and Nightwing appear in defense of the inmates, and Damian appears on the side of the Justice League.

Nightwing questions Robin's motives, whereupon the latter states that he's simply "bringing criminals to justice." He calls Bruce and Dick out for standing among various villains including Killer Croc and Calendar Man. The latter asks Wonder Woman if she remembers him. When Superman confronts Batman, saying he shouldn't be standing among them, Zsasz taunts Superman with the scars he made for every kill he made.

Diana asks Victor if he is patched into the Arkham security system, and opens up Zsasz's gate. He then blinks out of his cell, and The Flash is revealed to be the cause of their disappearance. The Mad Hatter then becomes frightened, acting sincere and forgiving for what he's done before The Flash then takes him away.

As Victor prepares to open another cell, Bruce activates a button on his belt that sends Victor into shock and pain. Diana and Clark rush to his side, unsure of what happened. Nightwing chimes in, saying they don't want to look bad "in front of the psychopaths."

Outside of Arkham, Green Arrow and Harley Quinn walk through the front gates. Oliver is upset at Harleen for setting a fire that burned much of the Arrow Cave. As Oliver brings Harleen inside, the guard on duty, Kenneth, mentions that there are other heroes inside already. Green Arrow tells him to watch Harleen as he goes to meet with Batman, Superman and Wonder Woman. Harley uses her fake mustache to unlock her handcuffs, knock out the guard and access the Arkham security system. She talks to an unknown, hulking figure, whom she says she will release, but only if he "destroy[s] the joint."

As Victor recovers from the shock attack, he verifies the date signature of the virus that attacked him. He sees that Batman implanted it into his system the first day they met and is outraged. Before the heroes can fight among each other, an arrow flies in between Batman and Superman. Green Arrow is seen, who says he's "admitting someone."

Just then, Harley Quinn comes on over the loudspeaker and unlocks all the cells of the Arkham inmates. She also says that she's sent someone to help. A rumbling is felt in the floor as Batman says "She's turned off the dampeners!" Solomon Grundy rips up the floor, grabs Damian Wayne and falls back into the ground.