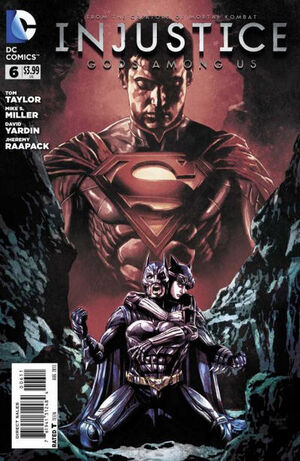 When a god-like, superfast guy who can see and hear what you're doing whenever he wants, suddenly decides to swoop out of the sky and put his fist through one of the world's most high profile criminals...Well, that's the sort of thing that can cause your average criminal to pause.

Appearing in "Injustice: Gods Among Us - Part Six"Edit

Synopsis for "Injustice: Gods Among Us - Part Six"Edit

Harley Quinn is seen commanding the Asylum inmates to attack the Justice League and Insurgents, asking that they spare Green Arrow in the process; she thinks she has a crush on him. The Riddler lifts a large boulder over his head in an attempt to crush Cyborg's head, but can't think of a riddle fast enough. Green Arrow shoots a boxing glove arrow at his head and he drops the boulder.

Wonder Woman attempts to cut Solomon Grundy's hand off to try and free Robin, but he swats her away and into the bedrock around them. Barry runs to get her as Nightwing tells Superman that Grundy is already dead, and that there's no need to "hold back." Richard says he'll get Damian while Kal "release[s] some of that tension."

Kal uses his heat vision to cut Grundy's hand off and flies straight through his chest, leaving a large hole as Damian falls to the ground. Richard pries his fingers open and helps Damian up. Damian said he had it under control while Richard laughs at him, asking Damian if he was "lulling it into submission." Batman flies down from above and asks Nightwing and Robin to help him put the inmates back in their cells. Bruce destroys what's left of Grundy's head and leaves to put his corpse back in his cell and turn the dampeners on. Damian and Richard fight off many inmates above. When Robin begins viciously beating the Riddler while he's on the ground. Nightwing yells at Robin for beating him while he's down. "Robin doesn't beat people while they're down!" Damian tells him to shut up, that he isn't Robin anymore, and throws one of his escrima at Richard's head. He doesn't expect the throw and is knocked back onto his head. His neck lands on a rock on the ground and breaks his neck, killing him.

Robin approaches Nightwing's corpse, visibly upset. Batman, Superman and Wonder Woman come back up from the hole and order the Arkham inmates back into their cells. Bruce notices Damian kneeling over Dick's lifeless body. Damian is now crying, trying to say he's sorry to Bruce. Bruce is outraged and an emotional wreck, throwing Damian off of Richard's corpse. As the reactions of various characters, both hero and villain alike, are shown, Batman's quote from two chapters ago is repeated, this time identifying which of his sons had died. Batman leaves Arkham, abandoning Damian saying "My son is dead."

Catwoman is seen in an alleyway, commentating the past life of a man, Joey, who lost his job and wealth to the recession. He was shot and killed by a vigilante, inspired by Superman's murder of The Joker. Selina laments the fact that he was a harmless criminal, versus the suited and rich businessmen who steal far more money than thugs with guns. As she enters the house of a wealthy bank owner and breaks into his lockbox filled with cash and gems. As Selina contemplates taking some of the cash back to Joey's family, Superman appears and alerts the banker to both his and Catwoman's presence.

She flies out the window, but Superman catches her before she can escape further. When they come to the ground, Kal writhes in pain due to Selina's earring made of Kryptonite that she had stolen from the Batcave. As she enters a sewer, Superman superheats the Kryptonite and forces her to take it off and throw it into the water below.

Initially, Selina believes Kal will kill her in the sewers. However, he tells her that he only wants to talk. Kal informs Selina that Richard died, and that she needs to comfort Bruce. Catwoman laughs at Superman, saying Batman would rather take a bullet for Superman, and Superman would rather fight Doomsday to the death than talk to each other.

When Superman pleads further, she agrees to go, but informs Superman that there are more people who are in need other than those in war-torn countries. Selina tells Kal to "Remember all of the displaced people right here at home. Don't forget them."

At Wayne Manor, Selina tries to enter but the door is locked. She breaks in and walks in on Alfred drinking, alone. Alfred is visibly upset and does not appear to have slept for quite some time. As she walks in on him, Alfred appears aghast at himself and tries to go fetch some tea. However, Selina calms him down, saying "I'll be looking after you for a change."

Selina descends into the Batcave, where Batman, still in his suit, has been repeatedly punching a wooden post for an unknown amount of time. His hands are very bloody, and he is extremely upset and crying. His hands are visibly bloody and his gloves have worn away to reveal cracked skin beneath. Selina pries Bruce away and takes off his mask. She tells him to let go, relax, and that she'll hold him together as he crumples into a heap on the ground.

Batman and Catwoman are seen sitting on the edge of a building, with the Batsignal in the sky. Selina comments how she doesn't usually head towards police stations as the Gotham City Police Department comes into view. When Bruce and Selina touch down, it is revealed that the President of the USA lit the Batsignal, and not Commissioner Gordon as Bruce had thought.

Batman, Catwoman and the President descend into a room completely sealed off to Superman's senses. When he tries to say he's sorry for Nightwing's death, Catwoman recommends he choose a different topic. The President comments that Kal wouldn't be interested anyways, seeing as two communication satellites have "mysteriously" fallen out of orbit towards Russia.

The President shows Bruce and Selina videos of the Justice League's interference with world affairs, including forced peace negotiations between Israel and Palestine, Wonder Woman's appearance in Burma, the defense of Syria by Green Lantern and Shazam, and Raven terrifying the nomadic tribes of Sudan into submission.

The three discuss the effects of their efforts, but deduce that they will not amount to anything if the League cannot enforce what they have done. The President gets to the point: he needs Batman to take Superman down. Bruce says that he could do it, if absolutely necessary. However, Bruce and Selina turn the tables on the President when they confront him over his lackluster job as a President. When they list things that he needs to do better, the President accuses them of being like their League counterparts. Selina says "We're not telling you what to do. We're asking you to do better."

The President says that he'll try, and gives Batman a list of super heroes who have not aligned themselves with Superman's regime. "We think there's probably a reason," he adds. Selina laughs at some of the facts listed on their files. Bruce takes the East Coast while Selina takes the West.

Catwoman is seen with Black Canary, discussing some of the highlights of her file as Dinah subdues several thugs with martial arts and her Canary Call. Batman goes to Black Lightning to enlist his aide; he was working on finding housing for survivors of Metropolis, and those people who were away from the city at the time.

The next day, Batman is seeing talking with Martian Manhunter, who chooses to remain hidden. The rest of the Insurgents enter the Batcave, with Ollie mentioning how he's only listening; he hasn't signed up for anything yet.

When Batman says "You know why you're here," Nathaniel asks what their plan of attack is.

Retrieved from "https://heykidscomics.fandom.com/wiki/Injustice:_Gods_Among_Us_Vol_1_6?oldid=1436624"
Community content is available under CC-BY-SA unless otherwise noted.