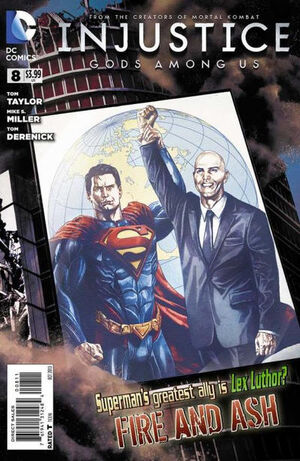 Kill the Kryptonian and take the Earth. Leave me and the Black Racer. Leave me to torture death.

Hawkgirl, having been replaced by J'onn J'onzz but disguised as the former, enters the Watchtower and tells the gathered Justice League members that Batman let her go, but with a message. He wants them to "stop working for the world and start working with it." Barry and Billy agree with her, saying they need to slow down and stop reacting to events and, instead, try to prevent them. Diana disagrees, saying they have brought "real peace" to the world. Barry counters with what the League did to Atlantis and Galaxor.

The argument continues with Shazam and Flash still opposed to Superman's and Wonder Woman's recent actions. Robin intervenes, saying this is exactly what Batman would want to happen: infighting and arguing among the Justice League members in order to create a rift between them and perhaps sever ties among them. Even though Hawkgirl tries to defend what she said, Lex Luthor quells the argument for good. He proposes a public announcement of the global ceasefire and an appearance, by Superman, to calm people's fears and doubts. The other League members agree, with Billy commenting on how he does not want "want to see us get turned into something we despise."

On Apokolips, Kalibak confronts his father, Darkseid, in regards to Earth's newly announced ceasefire. A voice of someone being tortured is heard in the background as Darkseid discusses his prisoner and the fate of Earth with Kalibak. Darkseid comments on how the prisoner "cannot be killed" and that no one would ever come to save him. He instructs Kalibak to kill Superman and take the Earth, and to leave him with the Black Racer. "Leave me to torture death," he comments, as the Black Racer is seen suspended from the ceiling by various torture devices.

Later, in Paris, the speech is being delivered by Kal and Lex. Kal discusses the actions him and the Justice League have taken, and the perception that people have on them. Harley Quinn is seen hiding in the sewer, and Batman, Catwoman and Alfred are seen in the Batcave, watching Superman's broadcast. Kal justifies his actions, saying he did not want the people of Earth to suffer any longer.

Kal admits that some of his actions were "extreme," but that they saved countless lives from war and destruction. His message was that he wants the people of Earth to be safe and that their lives are important to the Justice League.

A Boom Tube is then activated, delivering countless demons from Apokolips to Paris. Many people are killed as Superman is blasted by Kalibak. Kalibak simply says "I've heard you don't believe in fighting anymore, Kryptonian." Superman's enraged face is seen as he stands to fight the demigod from Apokolips.

Kalibak sees the rage in Kal's face, and asks him what's wrong. The latter punches the former high into the air, accidentally colliding with a plane overhead. Diana appears and prevents it from falling out of the sky as Kal sends Kalibak back to the ground.

In the Watchtower, The Flash, Cyborg, Hawkgirl, Green Lantern and Robin look on as countless armies invade Apokolips. Before Cyborg can teleport them down, more Boom Tubes are seen being activated across other cities.

In the Insurgency base, Batman and the other Insurgents watch as the armies invade the most populated cities. Bruce comments on how Gotham will be next, and that the Insurgents have to go out there and save lives. Dinah says that every time they faced a situation like this, they had the support of the Justice League. But now, they do not, and they need to work with the League to accomplish anything.

Superman continues his assault on Kalibak, who taunts Superman's unwillingness to kill Kalibak or his demons. The latter activates another Boom Tube on their location, restraining Superman as his super hearing listens to countless people's pleas for help as the demons kill them.

Kal determines he's had enough, and sends out an immense burst of his heat vision, vaporizing all the demons around him and knocking Kalibak backwards.

Cyborg and Green Lantern are talking, both in desperate need of backup. Barry chimes in, saying Batman and the Insurgents are definitely helping out but that their hands are full with the demons as well. Green Arrow and Black Canary are seen fighting back a horde of demons who threaten to overwhelm them.

Superman confronts Kalibak one last time, who exclaims his disbelief that Superman could ever do that. In his rage, Superman punches Kalibak to death.

Kal confronts Barry in super-speed, saying how if Kal were to talk with anyone else, countless people would die in the time it took to talk to them. Kal suggests that they need to stop saving the lives of their enemies at the expense of the people they're trying to protect. He says he doesn't want to hold back anymore, and that he doesn't want to handle enemies like Kalibak with "kid gloves". Barry says that he cannot give Kal permission to kill them, but that there is no other option to save the Earth than to do so.

Kal flies high above the Earth, charges his heat vision and flies back to Earth. He vaporizes hordes of Apokolips demons into ash, saving the lives of countless citizens of Earth, including Green Arrow and Black Canary. Batman and Batwoman are seen fighting the armies in Gotham, but they are all vaporized as well. Superman touches back down in Paris, where a mob of people from the speech are still standing. They chant Superman's name as Lex holds Kal's hand in the air.

Retrieved from "https://heykidscomics.fandom.com/wiki/Injustice:_Gods_Among_Us_Vol_1_8?oldid=1533551"
Community content is available under CC-BY-SA unless otherwise noted.