Injustice: Gods Among Us Vol 1 9 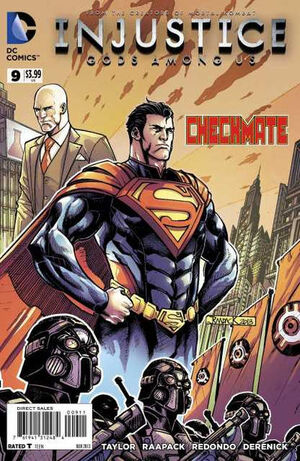 Time to crawl back into whatever intolerant hole you crawled out of.

The scene flips back and forth between the Watchtower and Insurgency base, with Diana and Selina commentating on Superman's recent actions. Diana says Superman saved so many lives, Bruce says he took so many lives, and Kal says so many lives were lost. Wonder Woman complements him on what he did, but he still affirms that more lives could have been saved if there had been more superheroes to get the people to safety and beat back the demons of Apokolips. Lex Luthor walks in and says that, soon, there will be many more super-powered humans to join the fight against evil.

In the Insurgency base, Batman laments on what Superman did. Huntress criticizes his despondence of what Superman did, saying he is a hero in the eyes of almost everyone else on Earth. Helena asks Bruce to tell Oliver and Dinah why their being alive offends him, with the couple almost being killed by the Apokolips armies. Oliver politely asks not to be brought into the argument.

Helena calls Bruce by his real name, not cognizant that most of the people in the room do not know his name. She grows even more upset by this revelation, with Captain Atom and Batwoman mocking Bruce's name. Just as Huntress is about to leave the room, Batman reveals the details of Superman's super-pill. Helena remains unconvinced, and Batman removes his helmet, revealing his identity to be Bruce Wayne.

The other Insurgents, save Black Canary and Huntress, appear shocked at this new fact. Batwoman motions to the television behind them, revealing a large mob of cultists who worship Superman with religious fervor. As Dinah and Oliver get to the Arrowcar, Dinah reveals she knew Batman's identity and kept it a secret.

On the way to the scene, Batman explains the details of the cultists to the other Insurgents. The cult had been growing after Kal killed the Joker, slowly growing in power and number. After Superman "literally smited [their] enemies from the heavens," the cult experienced a boom in members.

When Green Arrow tells Wonder Woman that they were handling the job, Diana simply says they weren't, and tells the Insurgents to leave.

Beaten but vigor unabated, the Insurgents leave to head back to their base.

In the Fortress of Solitude, Lex Luthor completes the synthesis of the first Super-Pill, meant to increase the strength of normal humans to godly levels. Jonathan and Martha Kent are seen in the Fortress as well, questioning his and Kal's motives. Martha and Jon tell Lex that they believe Kal to simply be a lost child having "a temper tantrum."

On the Watchtower, Barry accuses Kal of creating the Super-Pill with malicious intent. Kal says Alex was close to creating the pill prior to Metropolis, and that he didn't have the Kryptonian technology nor the knowledge to synthesize it. Barry is still hostile to Kal, but Superman asks Barry if he has ever played chess before. Unprepared, Barry says he hasn't and that he never slowed down enough to learn. He accesses the Watchtower computer file on it, watches the tape at "Flash speed," and begins a game with Kal.

In the Fortress, Martha tells Lex about a blanket that Kal, as a boy, carried everywhere with him. He wouldn't let his parents wash it and did everything with it. One day, he lost the blanket and, in frustration, flipped over a several ton tractor, stunning both of the Kent parents. Lex make a metaphor between Superman, and everyone for that matter, being small children. Martha simply says "Aren't we all?"

On the Watchtower, Superman and The Flash continue to discuss the former's proposal to remove all guns from the Earth. In one or two days, Kal and Barry would be able to remove most guns from their owners, but Barry argues the point that just because they can do it does not mean they should. If the people do not give up their weapons willingly, they will resent the Justice League. Kal says that they will be alive to resent them, and that attempts at rebellion would only see the rebels armed with sticks and stones. Superman makes a checkmate on Barry.

Lex asks Jonathan if believes Superman is simply having a "super tantrum," to which Jonathan tells Luthor that a temper tantrum does not describe what Superman is going through. He mocks Alex, asking him if, as the smartest person on the Earth, he can see that Kal needs help. Martha restates that Kal is simply a man; incredible, but a man.

Barry begins to get the upper hand on Kal and declares checkmate on him, telling Kal that cigarettes kill far more people than guns do. Then people speeding in cars, people who leave dogs untied, and people who do not recycle will be imprisoned or killed. Barry racks up checkmates at superspeed.

Lex says he wants to believe in Kal's cause, but that he feels guilty for having survived when Metropolis was destroyed. Martha references Krypton's destruction, and that Superman could not possibly stand to see everything he loves die again. Jonathan motions to the Super-Pill, telling Luthor that he had created the means to stop Superman and that, on the day that Superman may need to be taken down, Lex will need to do the right thing.

In the Watchtower, Lex Luthor is introducing the Super-Pill to the other members of the Justice League. Damian is reluctant to believe it works, telling Alexander he's only seeing "magic pills". Lex retorts, commenting on Damian's presence among men and women with incredible powers on board a floating space station and that "magic pills" mystify him. Superman suggests they give some of the pills to people the League trusts in order to help better police the globe. Hawkgirl remains pessimistic about the pill's success, but Kal is certain it will work.

Later, Damian steals one of the pills and accesses the Watchtower teleporter in order to go to the Batcave. Hawkgirl follows closely behind him. In Gotham, Damian comes across Dick Grayson's armor, and whispers an apology as Alfred sneaks up behind him. Alfred asks Damian if he received his letter, and asked if he intended to reply to it anytime soon.

Bruce drives in on the Batmobile, asking Damian why he's here. As the latter goes to leave, Alfred whispers to Bruce, asking Bruce not to be himself and, instead, be a father to Damian, who is guilt-ridden over Dick's death. Bruce calls out to Damian, telling him he just wants to talk.

Damian then confronts Bruce, saying he left Damian at Arkham after he stood against Bruce. Damian is upset that Bruce would put his own crusade in front the ideologies of his son, and that it's always about Bruce and no one else. Alfred tries to calm Damian down, but is knocked back into the Batcomputer due to the effects of the Super-Pill. As Bruce tries to attack Damian, he knocks Batman back into his giant penny, which begins to fall on top of Alfred. Hawkgirl flies in and catches it before the penny can flatten Alfred.

As Hawkgirl tries to take Damian back to the Watchtower, Bruce asks her not to. Damian questions why Shiera would listen to Bruce, and how she would even know where the Batcave was. The pieces begin to fit together inside Damian's head, and he activates an incendiary explosive, revealing Hawkgirl to be J'onn J'onzz, the Martian Manhunter, in disguise. Both J'onn and Damian flee the Batcave.