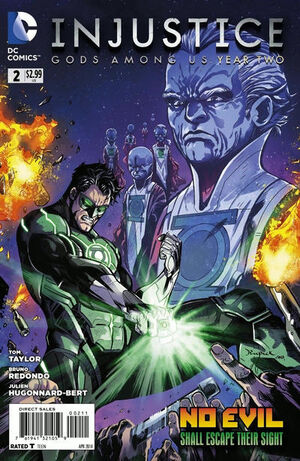 Hal is seen flying one of Ferris Aircraft's planes, which has just experienced a severe malfunction. Carol is in the control tower trying to convince Hal to evacuate the plane, but he remains steadfast in his ability. The plane seemingly crashes to the ground and Carol rushes out of the tower, only to see the plane, and her boyfriend, intact. When she asks Hal to show her his hand, he reveals a Green Lantern Ring. Carol is annoyed that Hal is wearing the ring outside of his work, but Jordan defends his actions as necessary for the world. She forgives him, and the two embrace before Hal receives a call from someone. He changes into his Green Lantern uniform.

Superman informs Hal that the United States Congress is about to shut down the entire country, and that Hal must intervene on the Regime's behalf. When Lantern questions these actions, Superman tells Hal that it is the Green Lantern's duty to protect the people of his planet, no matter what happens. When Hal inquires about Diana's health, Kal tells him that she still remains unconscious but alive. Lantern tells Superman that "she doesn't know how to stay down" as he approaches Congress. Before he enters, Kal tells Hal that Barry will meet him there.

Just before the Speaker of the House is to close down the United States Government, Green Lantern and Flash enter the room and lock the doors. They tell those gathered that no one will leave the room until a resolution is passed.

At the Tower of Fate, the cellphone in Batman's utility belt rings, with the Caller ID showing "POTUS", short for President of the United States. When Bruce asks if the Tower of Fate has cell phone reception, Doctor Fate cryptically replies "We are in all places and none." Zatanna resolves the answer to mean it has cell phone reception. Alfred tells Bruce not to answer the phone, and that it will be redirected to somewhere else.

Oracle is seen answering the phone. The President is concerned for Batman's whereabouts when he does not answer the phone, but Barbara assures the President that Batman is all right, even after "Superman happened." The President says he does not want to put his faith into a faceless voice, however Oracle tells him that she is a member of the same group who are working to take down Superman. She tells him that they may be able to fight back with the Super-Pill Batman retrieved.

The President then informs Oracle that "Superman's people" have taken Congress hostage. When the Speaker objects to Hal and Barry's interference, Lantern informs him and the rest of Congress that they have forgotten that they serve the citizens of the United States, and that they argue like children. Hal expresses the transparency of Congress' corruption, and that it is clear many representatives present only serve their own interests. When the Speaker tells Hal that he has no right, the latter replies that his right comes from "a much higher authority than yours." He instructs the Congressmen to do their duty.

On the Watchtower, Hippoylta and several Amazonian guards are seen standing over Diana's hospital bed. She informs Superman that they will take her back to Themyscira where they have "actual gods" that will heal Diana. Just then, the proximity alerts are set off and Robin rushes in to tell Superman that Sinestro has arrived outside the Watchtower.

Kal-El tells the Amazons to take the teleporter and leave while Superman exits the Watchtower to confront Sinestro. When Kal-El punches Thaal into the moon, Sinestro informs Kal that the Korugarian means no harm, and that he has come to warn Superman of the Green Lantern Corps' imminent confrontation on Earth. They want to return the world to the way it was, even if it means taking down Superman.

In Congress, a resolution to keep the government running is passed at 3:00 in the morning. Hal and Barry leave, but are confronted by police and army vehicles. Ganthet and Guy hover above them all, with Gardner complimenting Hal for "pissing off an entire country without [him]". Ganthet and Hal lock eyes, and the Guardian asks Jordan to take him to Superman.

Retrieved from "https://heykidscomics.fandom.com/wiki/Injustice:_Year_Two_Vol_1_2?oldid=1533547"
Community content is available under CC-BY-SA unless otherwise noted.