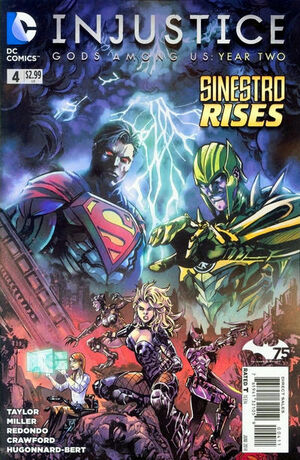 The Guardians know you're not going to help. I argued for you but they don't trust you on this one. Sorry, poozer. I'm going to have to ask you for your ring until this is over.

The Flash, Lex Luthor, and Superman are arguing about what to do with Sinestro. Barry and Lex believe that he is a dangerous criminal who is not to be trusted, but Superman is willing to extend a hand to him after Sinestro warned the Kryptonian about the Green Lantern Corps. Sinestro affirms his support for Superman, and that his "pets" are right to fear him. The Korugaran also says he and Superman are alike: Sinestro sees much of his own past inside of Superman, and does not want Kal-El to face the same endgame Sinestro did as a Green Lantern.

Thaal Sinestro used to be a Green Lantern of Sector 1417, which included his home planet of Korugar. He faced an incursion from a rogue Manhunter, but was denied any sort of information as to why it attacked him. Upon returning to Korugar, he sought to fix what he saw as a corrupt political climate. Thaal forcibly usurped the ruling party and installed himself as a dictator. He brought his wife, Arin Sur, and daughter, Soranik Natu, to Korugar where he believed they would live peacefully. Unbeknownst to Sinestro, Arin sent their daughter off-world for fear of being sought out by the exiled politicians. Her fears were substantiated when she was found murdered in her own room by Sinestro; one of his advisors told the Green Lantern that they believed the murder to have been caused by the exiled. In a rage of revenge, Sinestro sought out and murdered all of them brutally.

News of Sinestro's mass murder spread quickly. The rest of the Green Lantern Corps, including Hal Jordan, Kilowog, and other veteran Lanterns, were sent to apprehend the dictator. Mad with power, Sinestro fought back with raw might, but was no match for the combined might of many capable ring-wielders. Hal Jordan, Sinestro's student, was the one who removed Sinestro's ring from his finger.

In the present, Sinestro ties his story together: Superman will be experiencing events similar to those that Sinestro experienced. Thaal phases through the laser prison that had been meant to keep anyone contained, but reveals his purpose in doing so was to give Superman his Qwardian Power Ring. He trusts that, when the time comes, his ring will be returned to him and he will be able to fight the Green Lanterns at that time.

Hal Jordan is being questioned by the Guardians of the Universe. Jordan argues that Superman's intentions are not malicious, and are only meant to benefit Earth. Ganthet retorts that Superman and his Regime had forcibly toppled foreign governments and is in the process of constructing a super-powered army. Hal defends Kal, saying that the Justice League cannot be everywhere at once and that they need people who can be trusted to enforce peace. He also says that if the Guardians have such a problem with giving super powers to normal people, they should reconsider their modus operandi. The Guardians dismiss Hal, and say that they will consider his input while deciding upon what to do.

Kilowog greets Hal briefly, but their reunion is cut off by his being called to the Guardians' Citadel for a meeting. John Stewart greets Hal, who asks why he was called back to Oa, along with a large contingency of Green Lanterns. Hal explains what has been happening on Earth, but doesn't reveal the size of the changes occurring. Kilowog returns from his meeting, and informs Hal that he will be taking a group of the best Green Lanterns to Earth in order to apprehend Superman for questioning. Hal states that he will refuse to help the Corps take down Superman. Having already identified this as a problem, Kilowog and other Lanterns surround Hal and ask him to give up his power ring until the job is done. Hal lashes out and sends various energy constructs at the gathered Lanterns, and flies off in an attempt to warn Superman.

Ganthet convinces the other Guardians that Hal will easily overpower the rest of the Corps, and that they must act to apprehend him. They create an energy barrier around Oa, preventing Hal from leaving the planet and allowing the other Green Lanterns to restrain Hal. On the ground, Kilowog punches Hal and knocks him unconscious. Kilowog orders Stewart to take Hal's ring and place him in a Sciencell. Kilowog and the other Lanterns then depart Oa for Earth.

Retrieved from "https://heykidscomics.fandom.com/wiki/Injustice:_Year_Two_Vol_1_4?oldid=1511977"
Community content is available under CC-BY-SA unless otherwise noted.