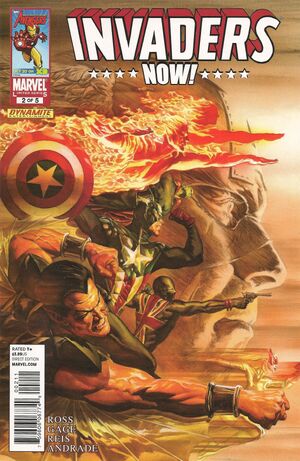 We cannot help them. They have to die.

Journey back to the darkest days of World War II, and witness the horrible events that took place on the worst day of the Invaders' career...when the legendary heroes committed a deed so terrible its repercussions threaten us all in the present! Plus: Learn the never-before-told circumstances behind Arnim Zola gaining his freakish artificial body! All this, and the return of the Invaders' worst enemies!

Retrieved from "https://heykidscomics.fandom.com/wiki/Invaders_Now!_Vol_1_2?oldid=1435616"
Community content is available under CC-BY-SA unless otherwise noted.