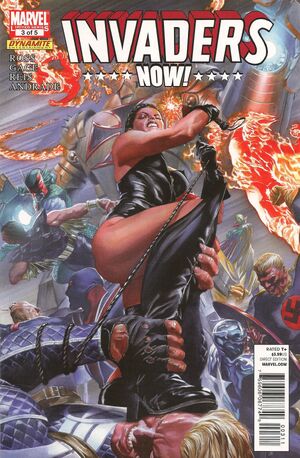 The Invaders return to the scene of their darkest moment from World War II—and their most feared enemies are waiting to meet them! Warrior Woman, U-Man, Master Man and a brand new Alex Ross-designed Iron Cross would be challenge enough, but there are larger forces at work...dark forces that tip the scales against the Invaders and will turn one of them against the others by issue's end!

Retrieved from "https://heykidscomics.fandom.com/wiki/Invaders_Now!_Vol_1_3?oldid=1435617"
Community content is available under CC-BY-SA unless otherwise noted.