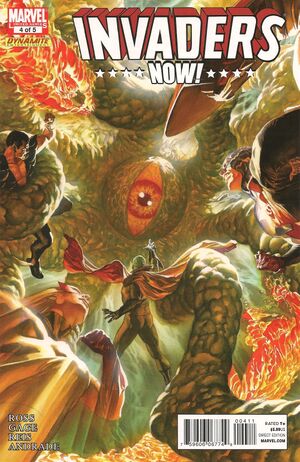 You've seen the Invaders go up against Nazis, super-villains and mutant monsters...but you've never seen them take on an elder god. Shuma-Gorath -- "He Who Sleeps But Shall Awake" -- has set his sights on our world, and only the greatest heroes of World War II can stop him...quite possibly at the cost of their own souls!

Retrieved from "https://heykidscomics.fandom.com/wiki/Invaders_Now!_Vol_1_4?oldid=1721877"
Community content is available under CC-BY-SA unless otherwise noted.