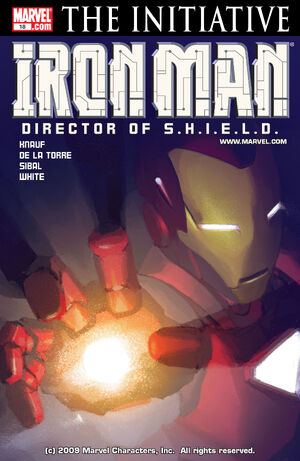 Appearing in "Kids with Guns vs. the Eternal Angel of Death"Edit

Tony hides out where it all began as Madame Masque's moment of triumph rings out across all the corners of Norman Osborn's empire. Black Widow and Maria Hill are trapped in the belly of the beast. Pepper's suit is in the possession of H.A.M.M.E.R. And when Stark's one last sloppy mistake gives up his location, it's Osborn himself that suits up and gets in the game. It all ends next issue, kids.

Retrieved from "https://heykidscomics.fandom.com/wiki/Invincible_Iron_Man_Vol_1_18?oldid=1651208"
Community content is available under CC-BY-SA unless otherwise noted.