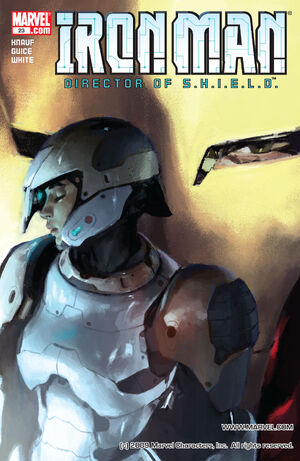 Appearing in "Ghost in the Machine"Edit

Things are grim in Broxton, Oklahoma as the Ghost moves in for the kill -- and the only thing between him and Tony Stark is a shell-shocked Maria Hill and a half-conscious Pepper Potts, fresh out of surgery. And deep in the recesses of Tony's mind, Dr. Strange and Stark get down and dirty with the tyrant king running the show and laying waste to Tony's consciousness. Where are they? What's happening? And why can't Tony remember the Iron Man?

Retrieved from "https://heykidscomics.fandom.com/wiki/Invincible_Iron_Man_Vol_1_23?oldid=1655291"
Community content is available under CC-BY-SA unless otherwise noted.