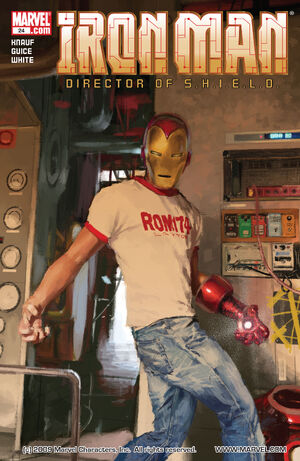 STARK: DISASSEMBLED comes to its conclusion! The Ghost vs. Maria Hill and Pepper Potts, alone inside an empty middle school! Tony Stark and Dr. Strange vs. the end of the world, alone inside the shattered recesses of Tony's once-great mind! After what might as well have been the entirety of the Marvel Universe coming together to get Iron Man back on his feet, can Tony himself run the last mile alone?What's left of a man after you take him apart?

Retrieved from "https://heykidscomics.fandom.com/wiki/Invincible_Iron_Man_Vol_1_24?oldid=1655292"
Community content is available under CC-BY-SA unless otherwise noted.