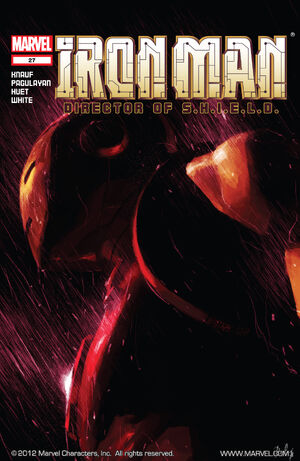 Appearing in "Stark Resilient Part 3: This is What We Do"Edit

Synopsis for "Stark Resilient Part 3: This is What We Do"Edit

Tony talks with Pepper, who wants her repulsor disc and her Rescue suit back. At first, Tony is reluctant, but Pepper states that she wants a new suit, just like Tony's. Despite this, Tony replies that he doesn't want to lose Pepper. Pepper says the he won't lose her, and then she asks him if he remembers anything about his time on the run. Although he denies this, Tony remembers the time when he kissed Pepper. Tony tells Pepper that she is the new COO of Stark Resilient, so she needs to find a way to prevent her time in the field from compromising her obligations to the company, then, they will talk. Pepper replies that she knew he would say that.

Tony and Pepper meet with Bambi Arbogast, who wants to return to Stark's company. Tony tells her that Stark Resilient is still a young company and it cannot afford to pay employees, but Argobast still insists in helping.

Meanwhile, in Tokyo, a group of mercenaries is attacking a subway station. However, Detroit Steel appears and stops them, while Justine and Sasha Hammer watch.

Pepper is prepared for a surgery that will place an electromagnetic battery inside her so that she can pilot the Rescue armor. Tony and Arbogast watch the surgery as they received an emergency call from Tokyo. Tony then finds Rhodey, dressed in his War Machine armor. Rhodey tells him that maybe he should walk away while he still can. But Tony says that he doesn't want to walk away. They will go to Tokyo, because that is what they do.

Iron Man and War Machine then fly to Tokyo.

Retrieved from "https://heykidscomics.fandom.com/wiki/Invincible_Iron_Man_Vol_1_27?oldid=1435692"
Community content is available under CC-BY-SA unless otherwise noted.