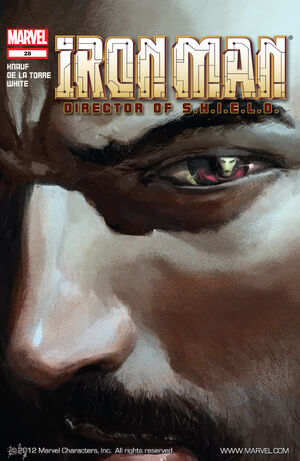 Maria Hill watches from the Avengers Tower the happenings in Tokyo. Iron Man and War Machine arrive to Tokyo and meet Detroit Steel, the hero of the event. Also present are Justine and Sasha Hammer. Sasha shows Iron Man the dead bodies of the criminals and tells him that their weaponry was made by Stark Industries.

Meanwhile, Arbogast has meeting with potential hires for Stark Resilient.

Tony and Rhodey go to a Stark Industries warehouse, where Maria yells at them for entering recklessly into Tokyo without her permission. Rhodey leaves while Tony and Maria talk. Maria is still angry at Tony, who replies that he has spent his whole life apologizing and that he still recovering from his memory loss. Tony then asks her why is she angry at him, and Maria remembers when she had sex with Tony, to which she remains silent. Tony then remembers that she has met Sasha Hammer before and goes to find some tapes.

While he gets the tapes, Tony meets the hires for Stark Resilient. Getting into a talk with the hires, Tony asks them to build a repulsor-powered car in six weeks.

Tony and Rhodey watch the tapes and discover that Sasha was with Ezekiel Stane when he destroyed Stark Tower Taipei. They conclude that whatever Detroit Steel is, Hammer and Stane are at the very heart of it. Rhodey then asks to Tony what will he do, and he replies that he will do a party.

In a hospital bed, Pepper awakens with a new repulsor disc embedded in her chest.

Retrieved from "https://heykidscomics.fandom.com/wiki/Invincible_Iron_Man_Vol_1_28?oldid=1435693"
Community content is available under CC-BY-SA unless otherwise noted.