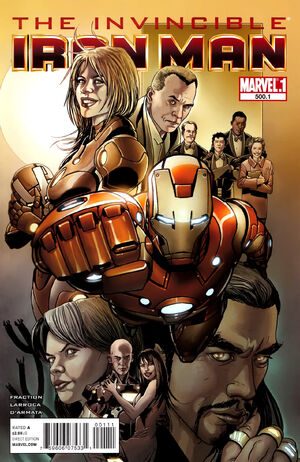 Hi, my name's Tony and I'm an alcoholic.

The issue opens with Tony Stark going to an Alcoholics Anonymous meeting in the side of a church. As the meeting leader asks if anybody is celebrating a sobriety anniversary, Tony Stands up, and tells his story. He tells the tale of his childhood all alone, his parties with friends, and how one day when his friends abandoned him, he found alcohol. The drinking helped him find women, the women helped him feel more confident, and the combination of drinking and women led him to the attack that caused the birth of Iron Man. As Tony tells the story of his rebirth as Iron Man, we learn of how he built up a shell using his drinking, women, and "work". And in this shell he disappeared. He disappointed everybody, made promises he couldn't keep, and subconsciously just wanted to die. But instead, he lost it all, hit rock bottom, and worked his way up to where he is today, finally happy without the bottle in his hand, and kept moving forward with his life.

The restaurant which appears in the end of the comic is called "Heck & Lieber's", a homage to Larry Lieber and Don Heck, co-creators of Iron Man along Stan Lee and Jack Kirby

Retrieved from "https://heykidscomics.fandom.com/wiki/Invincible_Iron_Man_Vol_1_500.1?oldid=1435727"
Community content is available under CC-BY-SA unless otherwise noted.