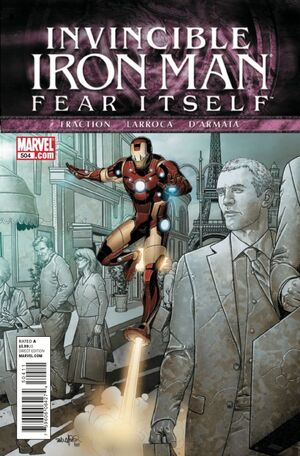 Appearing in "Fear Itself, Part 1 - City Of Light, City Of Stone"Edit

FEAR ITSELF TIE-IN FEAR ITSELF reaches its hand deep into the heart of the City of Lights! Iron Man races to Paris, France, to encounter one of "The Worthy" waiting there for him. How will the ultimate man of science react to a city turned to stone? And if that weren't bad enough, the world is going mad as the avatars of the Serpent begins start their rampages. How resilient is Resilient? How strong is iron?

Retrieved from "https://heykidscomics.fandom.com/wiki/Invincible_Iron_Man_Vol_1_504?oldid=1651296"
Community content is available under CC-BY-SA unless otherwise noted.