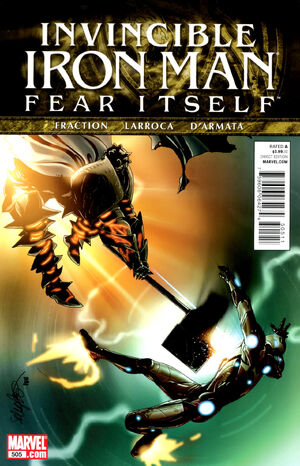 FEAR ITSELF TIE-IN! As the Iron Man cast reels from last issue’s stunning events, the Golden Avenger himself begins to unravel at the seams! But when fear begins to wrap its icy fingers around the globe and the people need Iron Man more than ever, will Tony Stark be able to answer the call?

Retrieved from "https://heykidscomics.fandom.com/wiki/Invincible_Iron_Man_Vol_1_505?oldid=1651298"
Community content is available under CC-BY-SA unless otherwise noted.