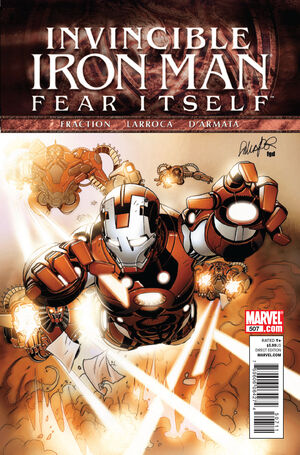 Appearing in "Fear Itself, Part 4: Fog of War"Edit

FEAR ITSELF TIE-IN The heroes’ darkest hour is at hand, and Tony Stark gets to work turning the tide of FEAR ITSELF. And as if things weren't grim enough – RESCUE engages HAMMER INDUSTRIES goons in the ruins of Paris as one of the Serpent's avatars goes on the hunt…

Retrieved from "https://heykidscomics.fandom.com/wiki/Invincible_Iron_Man_Vol_1_507?oldid=1651303"
Community content is available under CC-BY-SA unless otherwise noted.