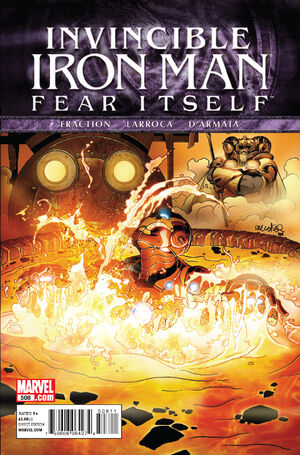 Appearing in "Fear Itself, Part 5: If I Ever Get Out of Here"Edit

FEAR ITSELF TIE-IN Tony finishes his work in Svartalfheim and must make the ultimate leap of faith to finish the job -- and try to get back to Earth in time to save it! Meanwhile Rescue has to deal with Hammer Industries’ Detroit Steel Corps and the monstrous Grey Gargoyle in the ruins of Paris…

Retrieved from "https://heykidscomics.fandom.com/wiki/Invincible_Iron_Man_Vol_1_508?oldid=1695337"
Community content is available under CC-BY-SA unless otherwise noted.