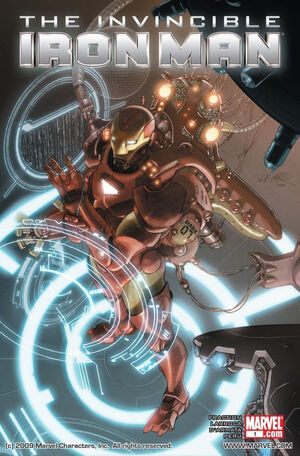 My new armor. I finally found a way to merge all my different armor modes into one. Armor that can change shape and color scheme based on mission stats. Armor not attached to my biology in that way that freaks just about everybody out but is completely attached to my brain synapses. I have to take this out.

In Beijing, an ex-A.I.M. employee meets up with Madame Masque in order to deliver her an unidentified item in exchange for a large sum of money. However, Masque doesn't fulfill her part of the deal and shoots him in the head.

At the Stark Tower in New York City, Tony has spent a long time tinkering with his lab ever since a M.I.T. student managed to reverse engineer some of his past technology, causing Stark to have his place under the limelight compromised. As a result of his time in the lab, Tony developed a new suit of armor that can change shape and color based on the task at hand, an extremely advanced armor that doesn't need to be biologically linked to him like other previous models. Before he can take the armor for a ride, Tony's A.I. assistant, Friday, reminds him not only that the armor needs time to recharge, but that he has a date in one hour.

After freshening himself up, Tony arrives to the restaurant where his date, Dr. Amara Perera, comes to a few minutes later. Meanwhile, Madame Masque breaks into the Stark Industries headquarters in Osaka, Japan. Back to Tony's date, he and Amara go up to the top of the Stark Tower. Tony reveals that he felt a little intimidated by Amara's work, and ultimately asks her a "genius to genius question;" how many things that she has kept for herself has she invented. Amara had thought of a cure for the mutant gene. While she hasn't even written it down, Tony fears people with psychic powers could get to her. The date continues as normal, and Tony tries to go for a kiss, but Amara rejects him, due to his reputation as a ladykiller. Luckily for Tony, the awkward moment following the denial is interrupted by Friday, who informs him that S.H.I.E.L.D. satellites have picked up Madame Masque breaking into Castle Doom in broad daylight. After apologizing to Amara, Tony suits up with his new armor and takes off.

Iron Man arrives at Castle Doom, which was almost in ruins after Doctor Doom lost control of Latveria and it suffered attacks from revolutionaries. A group of these revolutionaries confront Stark, who tries to explain he's there to help their country. However, they are suddenly knocked out by a sonic attack fired by mysterious individual behind Iron Man. When Tony turns around, he sees a man in a business suit, who tells Stark they need each other. While Tony doesn't recognize his face, his voice sounds familiar, and according to the bioscans performed by Friday, that man is none other than Victor von Doom.

Retrieved from "https://heykidscomics.fandom.com/wiki/Invincible_Iron_Man_Vol_2_1?oldid=1490784"
Community content is available under CC-BY-SA unless otherwise noted.