Part of the 'The Iron Age' story arc 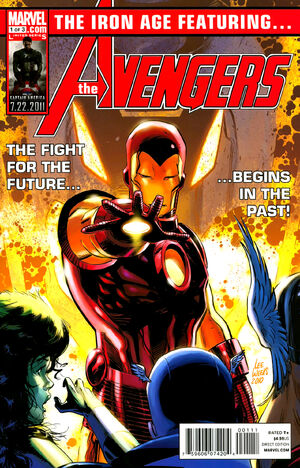 Appearing in "A Little Help from My Friend"Edit

Trapped in the past, Iron Man races the clock to save the future from annihilation. But his past self is in a drunken stupor, and Tony's fellow Avengers, dismiss his story as an alcoholic delusion. The keys to saving Tony’s future? Hank Pym...exiled Avenger and one of the Avengers' greatest enemies: Ultron! Christos Gage (AVENGERS ACADEMY) teams with comics legends LEE WEEKS and TOM PALMER - inker of more issues of Avengers than anyone else - to bring you an all-out epic in the mighty Marvel manner! THEN! Tony’s next stop is Captain Britain's London, a totalitarian state bent on a new, 'cleaner' future. Rob Williams teams with Ben Oliver (Ms. Marvel) as Iron Man and Captain Britain fight for freedom!

Appearing in "Panic on the Streets of London"Edit

Synopsis for "Panic on the Streets of London"Edit

The London segment of the story appears to take place sometime between the Captain Britain strips in Daredevils Vol 1 11 and Mighty World of Marvel Vol 2 7.

Retrieved from "https://heykidscomics.fandom.com/wiki/Iron_Age_Vol_1_1?oldid=1746335"
Community content is available under CC-BY-SA unless otherwise noted.