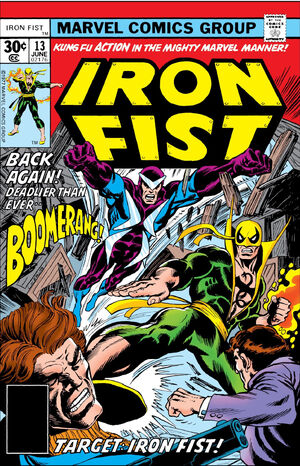 While the next issue is his official first appearance, Sabretooth is depicted, unnamed, on the last panel of the last page. However, he is called "Sabre-Tooth" by name at the end of the letters column in the preview blurb for the next issue.

Retrieved from "https://heykidscomics.fandom.com/wiki/Iron_Fist_Vol_1_13?oldid=1720123"
Community content is available under CC-BY-SA unless otherwise noted.