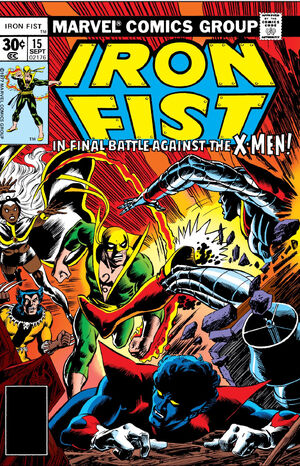 Appearing in "Enter, the X-Men"Edit

Synopsis for "Enter, the X-Men"Edit

Wolverine is shown wearing the costume he stole from Fang of the Shi-Ar Imperial Guard in this story, the only time he wears it after returning from space following X-Men #108.

Retrieved from "https://heykidscomics.fandom.com/wiki/Iron_Fist_Vol_1_15?oldid=1756531"
Community content is available under CC-BY-SA unless otherwise noted.