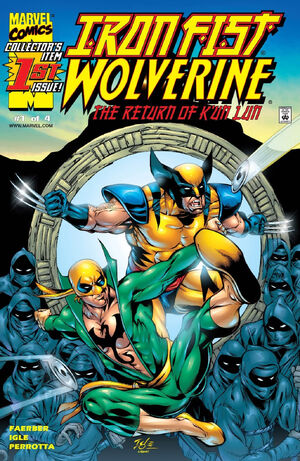 Appearing in "The Return of K'un Lun Part 1: Dark Horizon"Edit

Synopsis for "The Return of K'un Lun Part 1: Dark Horizon"Edit

Junzo Muto, the young leader of the Hand who now holds the power of the iron fist, plans to bring the city of K'un Lun to earth in the city of Tokyo, but to do this he needs Danny Rand to be there; The Hand captures Misty and Danny follows her to Japan where he meets up with Wolverine; Junzo begins transforming downtown Tokyo into K'un Lin.

Retrieved from "https://heykidscomics.fandom.com/wiki/Iron_Fist_Wolverine_Vol_1_1?oldid=1652630"
Community content is available under CC-BY-SA unless otherwise noted.