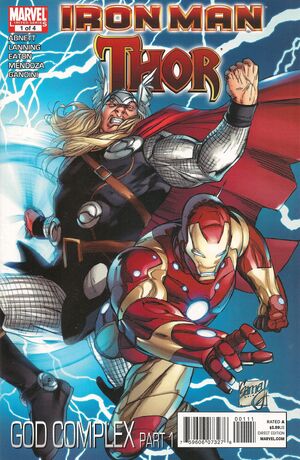 Thor, God of Thunder, Son of Asgard, heir to the ancient and mythic heritage of divine power! Iron Man, invincible hero, miracle of technology, offspring of scientific genius and engineering wonder! These two mightiest of Avengers come together to face a menace that is both magical and technological, and which threatens to wipe away the pantheons of legend and science so it can replace them with a shocking new order for the Twenty First century! Written by fan favorites DAN ABNETT and ANDY LANNING (Guardians of the Galaxy) and penciled by SCOT EATON

Retrieved from "https://heykidscomics.fandom.com/wiki/Iron_Man/Thor_Vol_1_1?oldid=1652477"
Community content is available under CC-BY-SA unless otherwise noted.