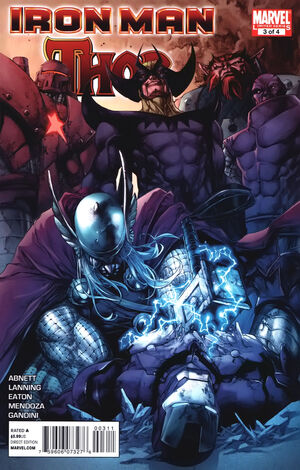 As the High Evolutionary puts in place the finishing touches of his chilling scheme to change the face of the planet, Iron Man and Thor find themselves side by side battling the potent and unexpected characters that the evolutionary mastermind has lured to his cause. But can the Golden Avenger and the God of Thunder ever defeat a threat that seeks to rewrite both the divine heritage of Asgard and the proud legacy of science? Worlds will change and nothing, not even the gods, will remain the same.

Retrieved from "https://heykidscomics.fandom.com/wiki/Iron_Man/Thor_Vol_1_3?oldid=1726970"
Community content is available under CC-BY-SA unless otherwise noted.