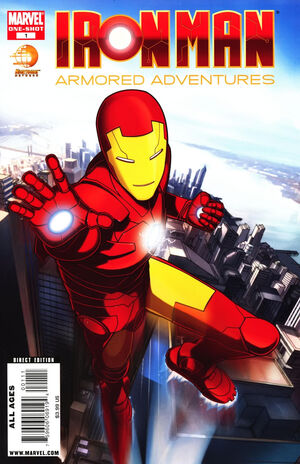 Appearing in "The Heart of a Hero"Edit

From the new hit show on Nicktoons Network comes Iron Man Armored Adventures! After a tragic airplane crash, 16-year-old Tony Stark’s loses his father and is so injured that he must use his dad’s repulsor technology to keep himself alive. In the aftermath, Tony also discovers a prototype for the IRON MAN suit, and donning it, Iron Man resolves to fight the enemies of World Peace! Fortunately, he has the help of Jim Rhodes and Pepper Potts, because in addition to trying to save the world he also has to deal with one of the most formidable forces in the known.

Retrieved from "https://heykidscomics.fandom.com/wiki/Iron_Man:_Armored_Adventures_Vol_1_1?oldid=1436336"
Community content is available under CC-BY-SA unless otherwise noted.