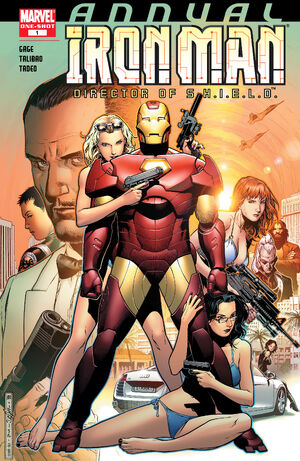 People of Madripoor. You've heard your princess' own admission of how she views you. As livestock. Chattel. Tools for the greater glory of Hydra. She is not worthy to rule us. Even now, my men and I march on the palace. Join us! Take back your country!

Stark briefs SHIELD on Madame Hydra and Madripoor and his plan to enact a regime change. Checking into a Madripoor hotel, Stark is greeted by Madame Hydra who injects him with an Extremis-blocking compound & GPS tracking unit. Before the compound takes effect Stark disables the GPS, then spurns Madame Hydra's advances. Upset, she kisses a bellboy, killing him with her poisoned lipstick. Cleaning the room of bugs, Stark and his agents go to Lowtown and start a bar fight where undercover agent Huang tells Stark how to contact Tyger Tiger. Bloodscream and Roughouse attempt to kill Stark and his agents but fail, destroying the bar in the process. Madame Hydra arrives, claiming that Huang tried to kill Stark, so she executes him. Returning to the hotel, Stark is attacked by Hydra agents. He and the agents escape using H.A.W.K. suits, leaving a bomb for Hydra. They set down in the jungle and are found by Tyger Tiger who is initially hesitant to openly challenge Madame Hydra for Madripoor's crown until Stark convinces her to try by showing her a secret Hydra weapons lab. Later, Stark confronts Madame Hydra at the Royal Palace, challenging her to a duel and goading her into confessing her contempt for Madripoor in front of a jury-rigged camera that's broadcasting live. Tyger Tiger leads a revolt against Hydra, while Stark calls his armor down from orbit, defeats Bloodscream and Roughouse as Iron Man, and destroys Hydra's new biological neural-disruptor cannon. Later, Stark congratulates Tyger Tiger on becoming Madripoor's princess, but is called away when Mount Wundagore shows activity.

Unable to depose her openly, S.H.I.E.L.D. sends in its best man to secretly take her down. His name? Stark...Tony Stark.

But with his Extremis powers blocked and his Iron Man armor hovering in orbit for emergencies only, can the Director of S.H.I.E.L.D. survive against enemies like Bloodscream and Roughhouse, who've nearly killed Wolverine himself?

Wizard's 2007 Writer to Watch, Christos Gage (Iron Man), and in his stunning Marvel debut, artist Harvey Talibao (Star Wars: Knights of the Old Republic), bring you a roller coaster ride of action and espionage that will change Madripoor forever!

Retrieved from "https://heykidscomics.fandom.com/wiki/Iron_Man:_Director_of_S.H.I.E.L.D._Annual_Vol_1_1?oldid=1549907"
Community content is available under CC-BY-SA unless otherwise noted.