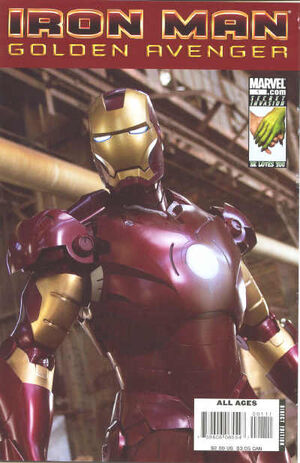 I'm starting to think Stark might want to call off the whole "Employee of the Month" thing.

Appearing in "Employee of the Month"Edit

Synopsis for "Employee of the Month"Edit

Stark International holds its first "Employee of the Month" celebration and the recipient of this month's award is Pepper Potts. Pepper's young assistant Callee however, is disheartened with Tony Stark's obvious affection towards Pepper and conspires to one-up her accomplishments.

To this end, she kidnaps Pepper and holds her captive in her bedroom at her mother's house. She then hires four known mercenaries, Blacklash, Jolt, Plantman and Spymaster, and arranges a faux attack against Tony Stark. Her intention is to swing in at the last moment using a modified taser device and save Tony Stark thus earning herself the coveted "Employee of the Month" award. Her plan backfires when the villains realize that they've been tricked and a super-powered battle ensues at Stark International. Tony Stark manages to summon one of his remote suits of armor to fight against the villains.

Meanwhile, Pepper manages to escape from Callee's mother's house and rushes back to Stark International. She affects some quick repairs to Tony's remote armor and the villains are apprehended. Callee, her scheme exposed, is also taken into police custody.

Retrieved from "https://heykidscomics.fandom.com/wiki/Iron_Man:_Golden_Avenger_Vol_1_1?oldid=1512369"
Community content is available under CC-BY-SA unless otherwise noted.