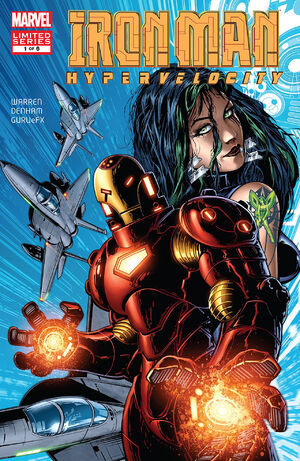 Fine. If you want to get technical about the issue... maybe I'm not exactly Tony Stark per se...

Iron Man is dodging missiles in the night, narrating a little bit about himself. A Capekiller team is trying to take him out, they ready a Godhammer missile for the purpose. They mention sifting through debris at Stark Industries for intel on the new armor. Iron Man is escaping, flying at speeds that should cause fatal g-forces. He reflects on his addictions; alcohol, women, high-speed hardware. His memory fails him as he sees a dark haired woman instead of the girlfriend he is supposed to remember. He rips open one of the fighter jets pursuing him, but it turns out to be unmanned and rigged with explosives. It detonates, sending Iron Man into another flashback as the missile nears.

With alcohol and women not being an option, Tony enters his armory lab. The armor is not in its place - not again! The armor opens up, lined with razor blades, trapping him inside it, laughing while it slices him up and swallows him. The girl appears again, next to the blooded armor. He wakes up from the nightmare, again wondering who the she was.

Iron Man recovers from the blast, but his radar detects the missile payload heading his way. The blast decapitates him. But, the armor proves to be empty. Iron Man picks reattaches his helmet again and admits that, okay, he isn't exactly Tony Stark...

The comic frequently has infoboxes with technical specifics about weapons, velocities and distances.

Retrieved from "https://heykidscomics.fandom.com/wiki/Iron_Man:_Hypervelocity_Vol_1_1?oldid=1436349"
Community content is available under CC-BY-SA unless otherwise noted.