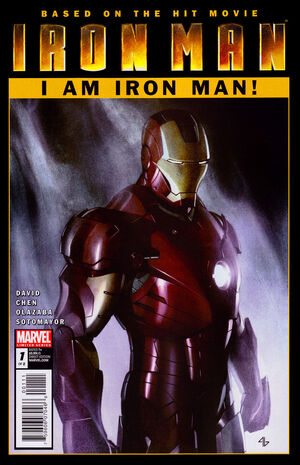 Appearing in "I Am Iron Man!"Edit

Gear up for the hottest movie event of 2010! Superstar creators Peter David (DARK TOWER) and Sean Chen (MIGHTY AVENGERS) bring the blockbuster IRON MAN to comics...just in time for IRON MAN 2! Tony Stark is a billionaire weapons maker...who’s given a taste of his own medicine. When he’s wounded and taken prisoner in the Middle East and forced to build a missile for insurgents, Tony creates a suit of armor to keep him alive and blast his way out! Now Tony sees the folly of his greed, and sets out to right wrongs as the armored avenger...Iron Man!

Retrieved from "https://heykidscomics.fandom.com/wiki/Iron_Man:_I_Am_Iron_Man_Vol_1_1?oldid=1436355"
Community content is available under CC-BY-SA unless otherwise noted.