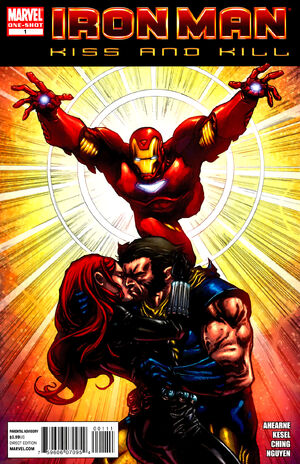 He’s got the tux. He’s got the tech. He’s got the babes. But he’ll leave the martini, thank you very much. Tony Stark gets his spy on in these two twisty tales of espionage and international intrigue. First, Joe Ahearne (FANTASTIC FOUR) and Brian Ching (Star Wars) show you why the Black Widow is an Iron Man’s best friend when Tony has to go undercover to take down a foe using his own decommissioned tech! Then, Karl Kesel (MARVEL APES) and Eric Nguyen (HALO: BLOODLINE) take you behind the velvet rope when Tony infiltrates the Hellfire Club to help out a wayward thief. Good thing he’s got Wolverine to back him up! Wait, no, that’s not going to end well...

Retrieved from "https://heykidscomics.fandom.com/wiki/Iron_Man:_Kiss_%26_Kill_Vol_1_1?oldid=1653116"
Community content is available under CC-BY-SA unless otherwise noted.