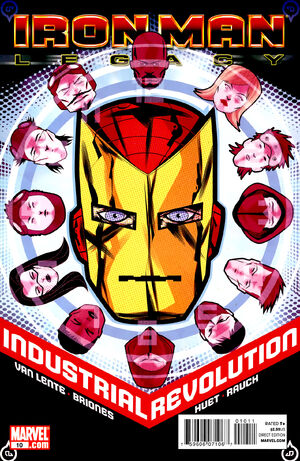 "INDUSTRIAL REVOLUTION" (Part 5 of 6) Before their children, the RUNAWAYS, became their greatest nemeses, the villainous PRIDE of Los Angeles faced their greatest threat when a destitute and penniless TONY STARK came to Los Angeles. Through cat's-paws both super powered and mundane they tried to break him, but every attempt failed. But now they've made a mistake by kidnapping the person closest to him and sacrificing her to their dark masters, THE GIBBORIM. Tony will do everything to get her back, including attacking The Pride on their own turf ... with some surprise guest-stars in tow!!!

Retrieved from "https://heykidscomics.fandom.com/wiki/Iron_Man:_Legacy_Vol_1_10?oldid=1764832"
Community content is available under CC-BY-SA unless otherwise noted.