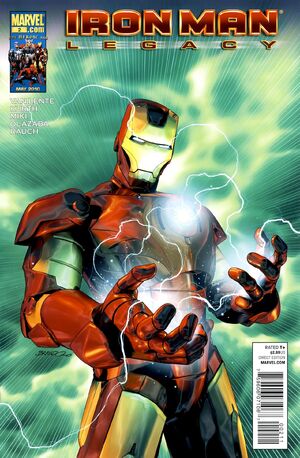 Appearing in "War of the Iron Men Part Two"Edit

WAR OF THE IRON MEN! Tony Stark wages a one-man invasion of Transia to hunt down and destroy the renegade Iron Men, setting off an international conflagration that threatens to engulf his friends, his company, and everything he's worked for! All this sets the stage for a jaw-dropping, no-holds-barred, heavy-metal armored slugfest the likes of which you've never seen! When the mysterious source behind the Iron Men is revealed on the last page, you won't believe your eyes…and neither will Tony!

Retrieved from "https://heykidscomics.fandom.com/wiki/Iron_Man:_Legacy_Vol_1_2?oldid=1488946"
Community content is available under CC-BY-SA unless otherwise noted.