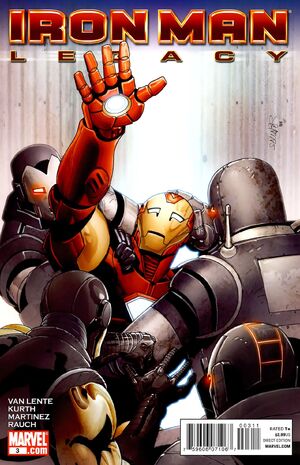 Appearing in "War of the Iron Men Part 3"Edit

The "WAR OF THE IRON MEN" escalates, but how! Captured by his enemies, stripped of the Iron Man suit, Tony Stark seems helpless, the way he was back in that cave in Afghanistan all those years ago…but unlike that Tony, this Tony has been taught hand-to-hand combat by Captain America himself! Armor? We don't need no stinking armor…But with an old foe hot on his tail, he might want to rig up a brand-new weapon – and fast!

Retrieved from "https://heykidscomics.fandom.com/wiki/Iron_Man:_Legacy_Vol_1_3?oldid=1728123"
Community content is available under CC-BY-SA unless otherwise noted.