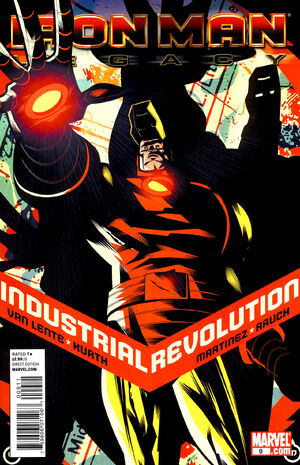 The residents of Imperio storm and occupy the factory TONY STARK needs to remake his fortune and prepare for a lengthy siege -- but even with JIM RHODES as IRON MAN backing him up, can they withstand what THE PRIDE can throw at them -- everything from super powers to the bought-and-paid-for LAPD? Tony may have to call in some backup -- from his allies in THE ILLUMINATI!

Retrieved from "https://heykidscomics.fandom.com/wiki/Iron_Man:_Legacy_Vol_1_9?oldid=1723100"
Community content is available under CC-BY-SA unless otherwise noted.