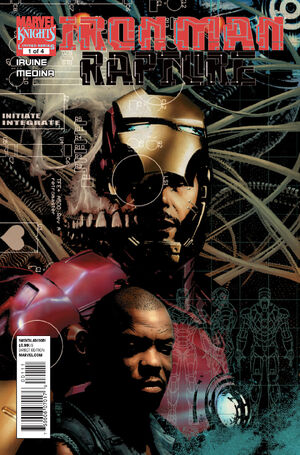 Nothing to be afraid of. Nobody's ever done anything like it. But this is the next thing. Human 2.0. The old version doesn't cut it anymore.

Tony had a heart attack and several hours later, he was in the intensive care unit hooked up to a mechanical device until he could get a transplant. Tony didn't want a transplant but decided to build his own heart. The next day, he had the new heart transplanted and he felt great. He started to build a new arm and dedicate himself to rebuild himself better and stronger.

He isolated himself from everyone and locked everyone out except for a technician. The technician discovered some Iron Man armor that was moving by itself. Then, he got killed and ended on a slab with a robotic version of Tony in his Iron Man armor standing over him.

Retrieved from "https://heykidscomics.fandom.com/wiki/Iron_Man:_The_Rapture_Vol_1_1?oldid=1436382"
Community content is available under CC-BY-SA unless otherwise noted.